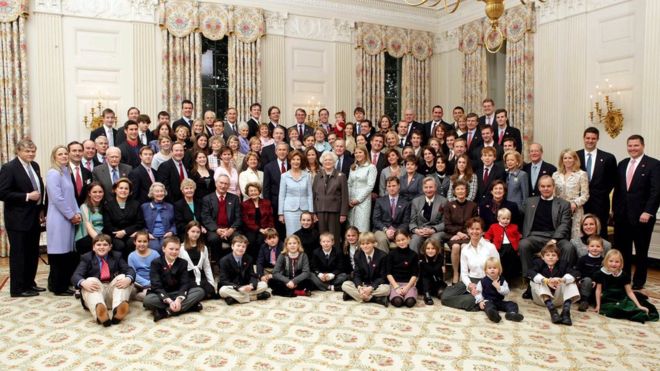 The Bush family has had two presidents, two first ladies, a state governor and a senator.

Although the Kennedys remain the largest political dynasty in modern American history, the Bush wing has several politicians with historical prominence among its ranks.

There is a grandfather who served in the United States Senate , a father and a son who occupied the presidential chair of the White House and a fourth member state governor . And that fact places the Republican family at the height of the Democrat.

George Herbert Walker Bush was born into a wealthy family.

He was the grandson of an iron and steel entrepreneur, the magnate S amuel Prescott Bush , who was named a member of a national commission on economics by President Herbert Hoover.

His father, Prescott Sheldon Bush , was a successful investment banker who became a partner in his Wall Street firm. He was the first member of the family to enter politics.

He was elected senator in 1952 , where he was a strong supporter of President Dwight Eisenhower.

Prescott contacts and wealth helped his son, George H . W . Bush , to earn a fortune in the oil industry before starting his political career in the 1960s and, finally, become the 41st president of the country.

The initial efforts of President Bush’s eldest son, George Walker, to continue the dynasty were not promising.

His paternal last name assured him his passage without problems by the military academy, the University of Yale and the petroleum industry, but the failure of his several business adventures forced him to spend more time in the bar of local bars than in his office.

His complaint: ” I have a lot of name but little money”.

And if George HW was then thinking about passing his political witness to someone in his family, the most likely candidate at that time was his son Jeb.

Jeb graduated from college in less than three years.

His marriage to Columba, who is of Mexican origin, and his command of English and Spanish allowed him to win southern voters.

Jeb Bush apparently was horrified when he first heard that his older brother’s political campaign in Texas, in 1994, had become “a story in People magazine .”

Jeb had overcome some family problems, including drug abuse on the part of his daughter, and always – at least at that time – rejected any questions about the “great job” (the presidency), ensuring that his only concern was “Florida, Florida, Florida . “

George HW’s younger children, Neil and Marvin , had also used their surnames to get into business, but until then they had shown little interest in politics.

The elections: the culminating moment

However, in a scene worthy of the Dallas soap opera, which made that state famous, it was his prodigal son from Texas who rushed to claim most of the family’s political legacy.

The efforts of George W . to transform his life included having quit alcohol, his commitment to Christianity and family life and becoming governor of Texas .

In the year 2000, he set his sights on emulating his father’s achievements.

That November, after the suspense of the vote count, George W. put on his cowboy hat, retraced his father’s footsteps to the Oval Office.

The state of Florida, ruled by his brother, largely determined the presidential outcome. There were accusations of irregularities and manipulation of votes.

In his time at the White House, George W. followed his father’s example.

The two men sent special forces to the Gulf. However, Bush Sr. let Saddam Hussein escape from his clutches, while the youngest pursued him into a hole.

When father and son spoke in turns during the funeral of former President Ronald Reagan (1967-1975), access and influence in Washington of a single family had rarely seemed so precise and lasting.

A Bush with Mexican blood

At the end of 2014, former Governor of Florida, Jeb Bush , announced that he was considering his candidacy for the White House, which immediately raised the possibility of another Bush-Clinton rematch, this time against Bill’s wife, Hillary.

He was, initially, one of the favorite republican candidates, but he did not shine and ended up being eclipsed by Donald Trump.

The analysts did not fail to realize that another Bush was about to break into the political scene.

Jeb’s son, George Prescott Bush , was first in the public eye when his grandfather introduced him to then President Reagan as “one of the little brownies” , referring to his Mexican ancestry.

George P. Bush tested political waters when he became the co-founder of Hispanic Republicans of Texas (HRT-PAC), a lobby group aimed at getting more Hispanic candidates to pursue political office in the state.

He spoke at the Republican National Convention in 2000 and impressed the audience with his handling of Spanish and English .

Then, in 2014, he won his first elections, becoming the Texas Land Commissioner.

It was another political success to the history of the Bush dynasty that seeks to continue spreading in American history.