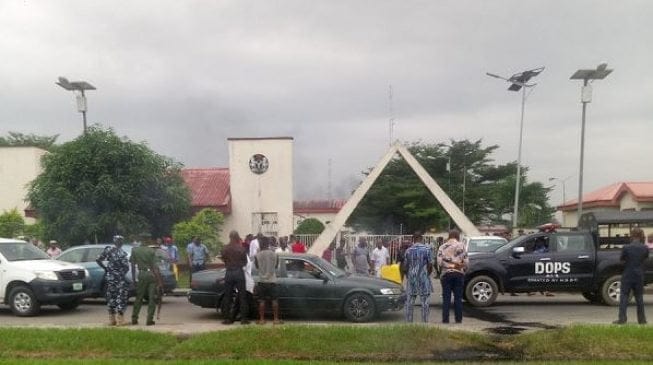 A former National Assembly member, Eseme Eyibo, has stated that the crisis affecting the Akwa Ibom State House of Assembly, is as a result of a ‘delinquent legislative display’ on the part of the Speaker, Onofiok Luke.

Eyibo, during an interview with Daily Post in Uyo, questioned the decision of the Speaker to declared the seats of five APC lawmakers vacant why the seat of a member representing Uruefong/Oruko constituency, Hon Asuquo Archibong remained intact despite the fact that he defected from the APC to the PDP sometime last year.

According to Eyibo, “What is happening in the Akwa Ibom state House of Assembly can be described as poor judgement and legislative delinquency on the part of the Speaker, and the governor iced the cake by his disrespect to the principles of separation of powers.

“The origin of this is very clear, last year, one and only APC legislator defected to PDP when there was no crisis in APC at the national level as stipulated in section 109 of the constitution.

“He was celebrated and his seat was not declared vacant, he is still a member of the House of Assembly. I wonder why what is good for the goose is no longer good for the gander.

“Five members who defected from PDP to APC had their reasons because PDP signed MoU with many political parties today called CUPP. That MoU is a formal kickstarting of merger because it is going to be give and take affair.

“The five lawmakers who defected to APC knowing fully well that PDP definitely would concede some of its ideologies and priorities to accommodate the other political parties decided to leave and they have the constitutional right to defect to any other party of their choice.”

The Spokesperson of APC governorship campaign council in the state claimed that “The Speaker should have been able to separate activism from lawmaking and by allowing himself to be influenced by Governor Udom Emmanuel in that matter, meant that there is actually no guarantee of the independence of the Akwa Ibom State House of Assembly.”

The APC spokesperson, who said the speaker acted ultra vires queried why the Federal High Court judgement against Idongesit Ituen, member representing Itu state constituency should be implemented against the other four APC lawmakers whose cases were still subsisting in court.

He recalled that gov. Emmanuel and Senator Bassey Albert were sacked by court but they appealed to a higher court and their seats were retained.

“Deacon Udom Emmanuel was sacked by Court of Appeal, was he removed as a governor? He had the opportunity to go to the Supreme Court and his election was affirmed. Senator Bassey Albert was also sacked by Federal High court so why was Bassey Etim not sworn in? It was because he had the opportunity to go to Appeal Court, that is why he is still a senator today. So, why should such injustice be meted on the APC lawmakers whose cases are still in court?”

The former house member stated that the only solution to the crisis is for the Speaker to recall the sacked APC lawmakers.