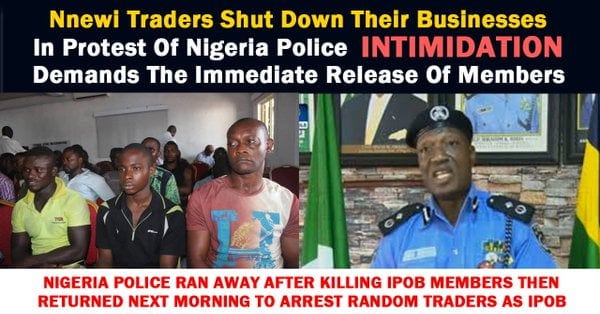 Traders in Nnewi town, Anambra State on Wednesday shut down eight major markets in the industrial city to protest the arrest of some of their members.

The Sit-at-home by Traders in Nkwo #Nnewi,continues in Solidarity of the 33 People, Mostly INNOCENT Traders abducted by the @PoliceNG following #IPOB Evangelism last week in the Area.They have been accused of 'Terrorism'& 'Killing' a police Officer, even though Nobody was Killed! pic.twitter.com/GdX8NaJ1M7

Naija News learnt that  the protesting traders demanded the unconditional release of their colleagues who they said were arrested by the police and paraded by the police as suspected members of the Indigenous Peoples of Biafra (IPOB).

Members of the trader’s union during the protest also lamented alleged intimidation by the police and the military.

Chairman of Agboedo Motor Spare Parts Dealers Association (AMSPDA), Gabriel Chibueze, told journalists that the detained persons were traders. He also threatened that business activities will be shut down throughout the state if their members are not released.

“We are calling on police authorities to immediately release our members. They are not IPOB members.

“They are genuine traders doing their legitimate businesses in this market when security officers came into their shops to pick them. The arrested traders could not have been involved in the fracas because the location of the protest was not close to the market.

“The place the protest took place is far from the market. In order to ensure that the fracas didn’t escalate to the market, we, the executive, closed down all entrances leading to the market while our members continued their businesses.

“Suddenly, we saw a combined team of Police and Army, who broke the entrance gates to the market and started beating our members. They arrested both masters and their apprentices.

The police had on Sunday paraded 33 suspected members of Indigenous People of Biafra (IPOB), who were arrested after a clash between the outlawed group and security agencies.The police had also reported that one of its officers was killed during the clash.

More than 53 nnewi traders are still under detention by the Anambra police commissioner under the authority of the inspector general of police. Idris the transmission transmission. #BiafraExit