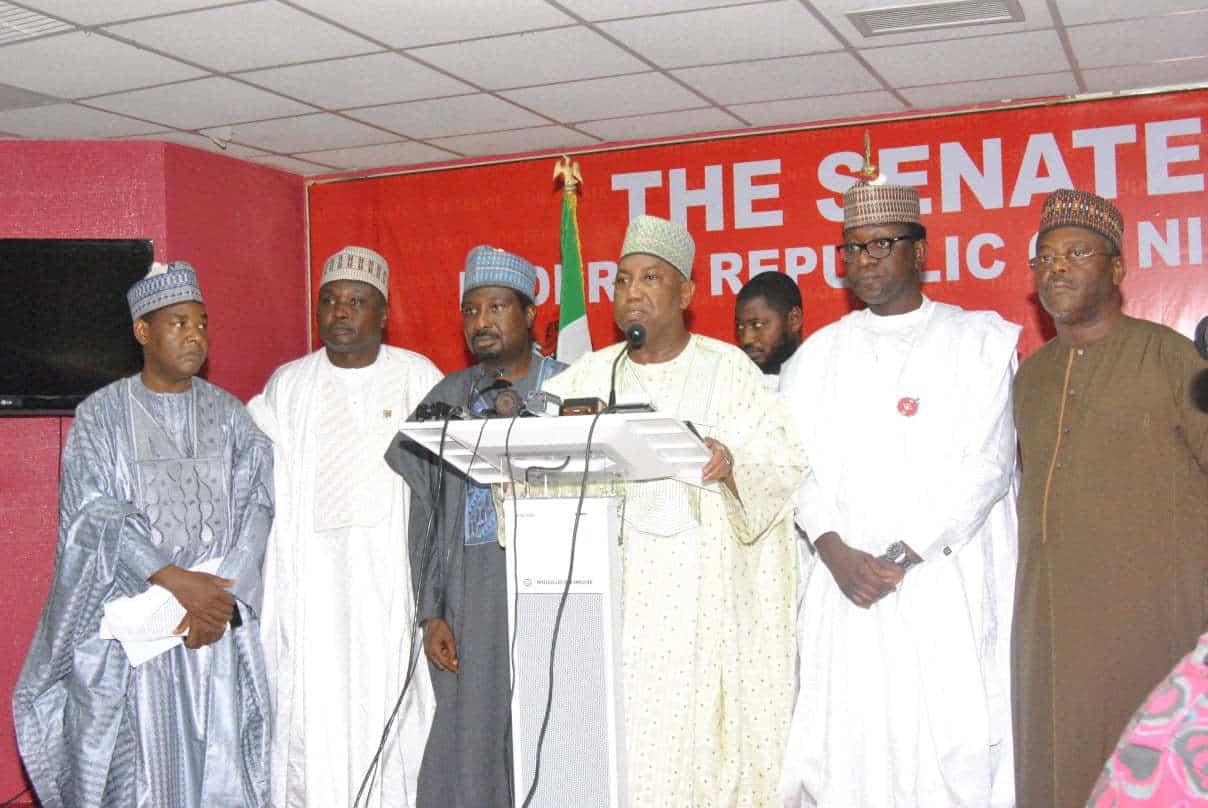 National Assembly members from Kano state elected on the platform of the All Progressives Congress (APC) have declares their support for their embattled governor, Umar Ganduje, who is accused of receiving bribes.

Naija News understands that the lawmakers at a press briefing earlier today said the governor has performed well and deserves reelection.

“As major stakeholders in Kano State, we hereby state unequivocally that His Excellency, Dr. Abdullahi Umar Ganduje has performed creditably well in the saddle of captainship of the State and has therefore earned our unalloyed support and vote of confidence,” they said in a statement.

Their support is coming at a time the governor in enmeshed in a bribery scandal, a matter presently in court. The EFCC has said it was handicapped in investigating the case as Mr Ganduje’s enjoys constitutional immunity from criminal proceedings.

In November, a Kano high court granted an interim order restraining the paper and Jafaar Jafaar, its publisher, from publishing videos about Mr Ganduje allegedly collecting bribe from state contractors in dollars.

The same court restrained the state House of Assembly from investigating the allegation.

Despite the allegation, the lawmakers led by Senator Kabir Gaya (Kano-South), passed a vote of confidence on the governor.

Senator Barau Jibrin (Kano-North) and five members of the House of Representatives were present. However, 16 lawmakers, comprising of two senators and 14 House members signed the statement.

Mr Gaya read an already prepared statement summarising the views of his colleagues.

“We, members of the National Assembly from Kano State have viewed with satisfaction the exemplary performance of His Excellency, The Executive Governor of Kano State, Dr Abdullahi Umar Ganduje in office since he assumed the mantle of leadership almost four years ago,” he said.

“Dr. Ganduje who came into office when a lot of factors seemed terribly against the tide of permeance for any State Chief Executive, especially the factor of economic downturn typified by the huge slide in the size of Federal Allocations accruable to the states, shocked many with his outstanding achievements in the various sectors ranging from infrastructural development to human capital development among others.”

The statement said the governor had initiated projects since he assumed office and completed those started by his predecessors.

The lawmakers said they made “bold to say that the leadership of His Excellency, Dr. Ganduje has brought unprecedented socio-economic development to Kano State such as never experienced.”

They also warned President Muhammadu Buhari to be wary of “roamers in the corridors of power who are more interested in their own personal ambition rather than the collective success of the Buhari Administration have keyed into this devilish scheme not only to undermine His Excellency, Dr. Ganduje but also to throw spanners into the electoral fortunes of Mr. President as far as Kano State politics is concerned.”

In what looked like a reaction to the video, the lawmakers talked down “blackmail” and “subterfuge” against the governor.

“No amount of blackmail and subterfuge can obliterate the excellent work that his Excellency, Dr. Abdullahi Umar Ganduje has done and is still doing in Kano State. All hands must therefore be on deck to support Governor Ganduje to win his re-election in 2019 in order to continue his good works in the state.”

Taking turns to speak, the lawmakers vowed to deliver more than 5 million votes they initially promised president Buhari. They however failed to answer questions on the bribery scandal saying the matter was court and their reaction would amount to subjudice.

The Telegraph newspaper has crowned Governor Abdullahi Ganduje of Kano State the Best Governor in 2018 in the areas of health & education despite an unresolved bribery allegation against him? But i thought PMB you we're fighting corruption??@YouthsForAtiku pic.twitter.com/Qv8TTHc3Rp