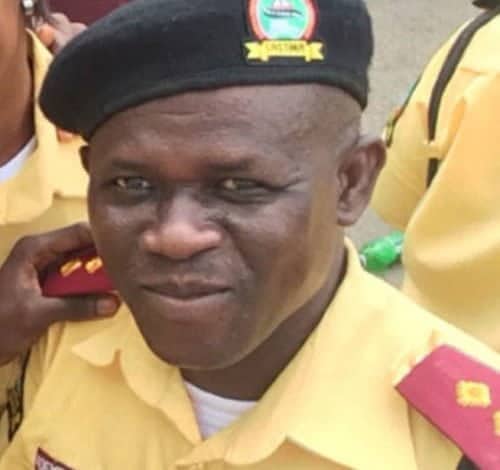 An official of the Lagos State Transport Management Authority (LASTMA), have allegedly been shot dead by a police inspector attached to the Federal Special Anti-Robbery Squad (FSARS), Ikeja while controlling traffic in the axis.

According to reports, the LASTMA official was shot dead when he challenged the policeman, identified as Joseph Oki, for disobeying traffic rules.

The victim, popularly known as ‘Baba Ibeji’, had stopped the police inspector who was driving a cream coloured Highlander jeep with registration number plate LSR 277 BJ to allow free flow of traffic.

According to eyewitness, the policeman, who felt degraded allegedly pulled a pistol and shot the LASTMA official in the eye, killing him on the spot.

“The traffic official, Adeyemo, was controlling traffic at Iyana-Ipaja when he asked the SARS officer to stop so that motorists from Agege could start moving. The man refused to stop and he (Adeyemo) moved away so that he could pass motorists from Agege. The next thing was that the officer brought out his gun and shot him at close range,” a source said.

The traffic official was rushed to the General Hospital in Ifako-Ijaiye where he was confirmed dead.

It was gathered that some policemen in the area reportedly rescued the FSARS officer from the angry crowd who also damaged his vehicle.

It was gathered that the suspected killer was first taken Moshalashi Police Station on Ipaja Road before being transferred to the State Command in Ikeja, GRA.

LASTMA spokesman Mahmud Hassan, while confirming the incident said that investigation have been initiated into the case.

Contacted, Spokesman for the Lagos State Police Command, CSP Chike Oti, did not deny the incident.

“I am writing a release on the incident,” Oti said.