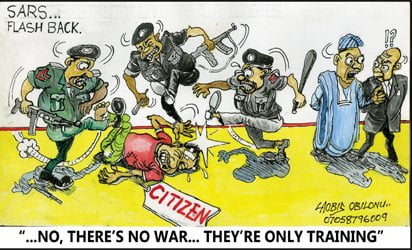 SARS is a unit of the Nigerian Police Force, and the sitting in Imo covers the South South and South East geo-political zones of the country.

I thought they said they've ended SARS. What a country we live in.They jumped the fence like the robbers that they are, opened the gate for the others to come in and damaged a lot of things. All because they were looking for people that i don't even know.@segalink pic.twitter.com/iKi4dPYohY

Naija News understands that the Executive Secretary, National Human Rights Commission, NHRC, Mr. Tony Ojukwu, who highlighted series of allegations levelled against SARS operatives across the country during his welcome address said that there has been persistent public outcry, complaints and numerous reports in the electronic, print and social media, alleging gross violations of human rights of fellow citizens by officers and men of SARS.

The NHRC boss, explains further that some of the complaints and reports border on issues of alleged abuse of power, arbitrary and unlawful arrest and detention.

“SARS operatives are equally accused of extortion, brutality, torture, inhuman and degrading treatment, as well as involvement of SARS in assignments totally unconnected with their primary duties”, Mr. Ojukwu said.

The NHRC Executive Secretary, who also doubles as Chairman of the Presidential Panel, was not happy that SARS were even employed to settle matrimonial disputes, contracts, tenancy problems and recovery of debts.

“It is important to note that before the request of the Presidency for the constitution of this Panel, the NHRC, in line with it’s statutory responsibility of investigating and determining cases of alleged human rights violations, had conducted public hearings into some allegations against SARS officials”, Ojukwu said.

It will be recalled that some of the matters slated for hearing included the alleged extra judicial killing of Mr. Emmanuel Ette Nkim, filed by Mrs. Esther Etta Nkim against SARS, Cross River State, Deputy Superintendent of Police Sekiru Akinlaja and seven others.

Mr. Okon, was said to have died on 13th day of November, as a result of alleged multiple beatings and torture inflicted on him, while in the custody of men of the Nigerian Police (SARS).

Also slated for hearing is how Ani Okechukwu allegedly gave N1 million to a policeman in Force Headquarters, Abuja, for the recovery of his stolen tipper in February 2017.

“While the policeman is still waiting to receive a balance of N.3 million, as he demanded, the vehicle has not been recovered and my money not refunded till date”, Okechukwu lamented.

No fewer than 31 matters are slated to be heard at this venue, before the Panel winds up December 1, 2018.