Kwara State Governor, Abdulfatah Ahmed has stepped down for Senator Rafiu Ibrahim as the candidate for the Peoples Democratic Party for Kwara South senatorial district.

According to information gathered by Naija News, the change in candidacy follows the request of the leadership of Ibolo division of Kwara South that the senatorial ticket be retained in the axis.

The change in candidacy was confirmed in an appreciation message by Sen. Rafiu Ibrahim on his Facebook page to both the Senate President, Dr. Abubakar Bukola Saraki and Governor Abdulfatah Ahmed.

The statement further revealed that the decision has nothing to do with the outcome of the recent by-election in Ekiti/Oke Ero/Isin/Irepodun Federal Constituency held on November 17 in which the PDP lost to the APC.

“I wish to express my sincere appreciation to the National Leader of our great party and Senate President, Dr. Abubakar Bukola Saraki and Governor Abdulfatah Ahmed for granting the request of the leadership of Ibolo division of Kwara South that the senatorial ticket be retained in the axis.”

“Ultimately, this was done in the interest of fairness and equity, as both Ekiti and Igbomina divisions of Kwara South have both produced senators who served two terms in the Senate.”

“I also thank all the stakeholders within Kwara South and the State at large for their efforts and support. Likewise, I extend my profound appreciation to my constituents, party members and advocates for their support and confidence in me. I will always be grateful to you all.”

“The decision of Governor Ahmed to cede the senatorial ticket following the pleas by Ibolo elders is highly commendable and this has further affirmed his reputation as an advocate of fairness, equity and inclusion. This is indeed leadership by example.”

“I think it is also important I clarify that Governor Ahmed’s decision to relinquish the ticket has nothing to do with the November 17 by-election in Ekiti/Oke Ero/Isin/Irepodun Federal Constituency. The outcome of an election that was characterized by rigging, harassment and intimidation of voters could not have led the governor to withdraw from the senatorial race.”

“You will recall that last week, on the floor of the Senate, I raised concerns about the conduct of the poll and the use of security operatives by the Federal Government and the All Progressives Congress (APC) to intimidate voters as well as harass members of the PDP.”

“It was on this basis the Senate directed its Committee on Police and National Intelligence to investigate the matter. I have no doubt that the PDP would have won the election if it was conducted in a free, fair and credible manner.” 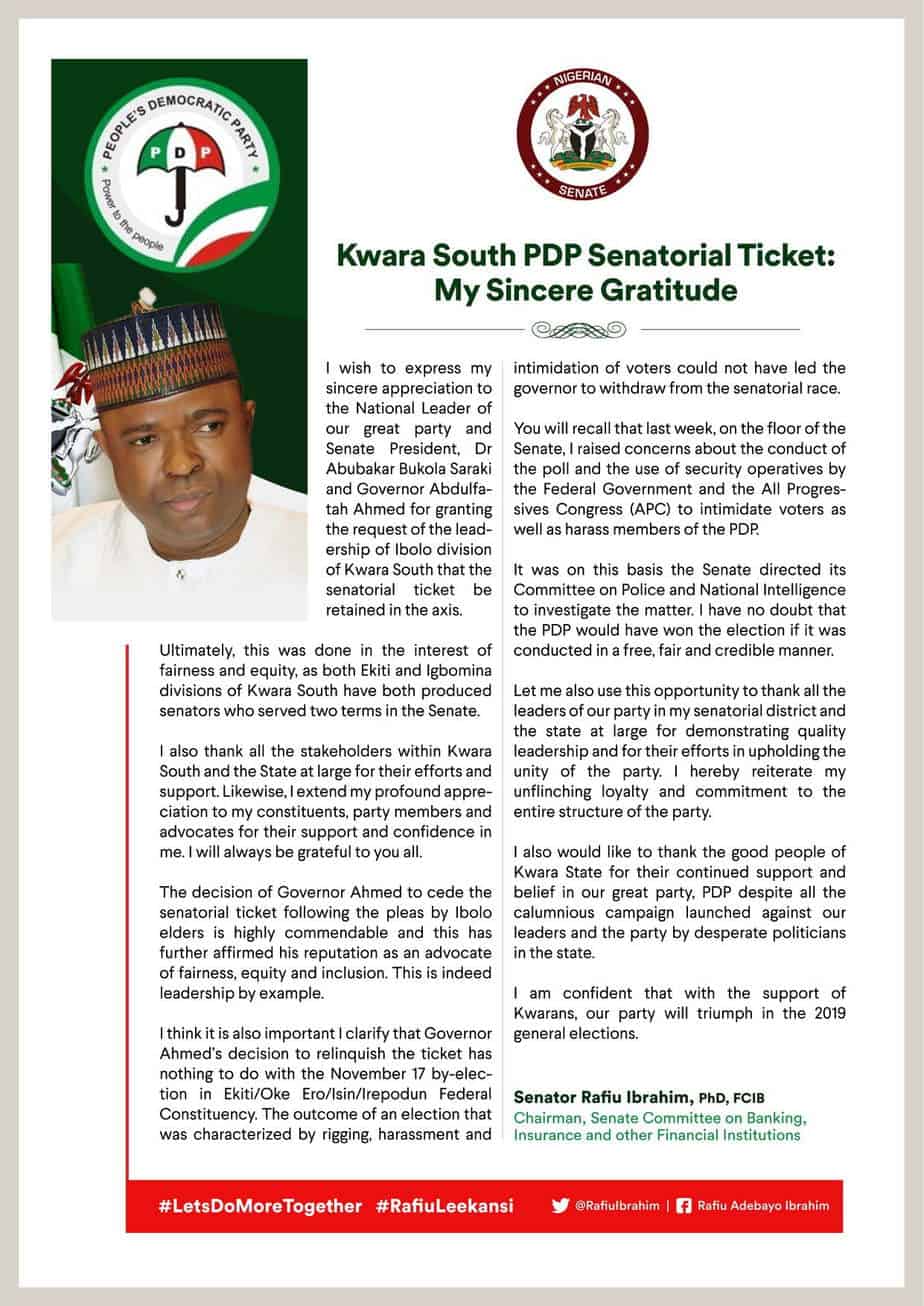 “Let me also use this opportunity to thank all the leaders of our party in my senatorial district and the state at large for demonstrating quality leadership and for their efforts in upholding the unity of the party. I hereby reiterate my unflinching loyalty and commitment to the entire structure of the party.”

“I also would like to thank the good people of Kwara State for their continued support and belief in our great party, PDP despite all the calumnious campaign launched against our leaders and the party by desperate politicians in the state.”

“I am confident that with the support of Kwarans, our party will triumph in the 2019 general elections.”

Attempts by our correspondent to confirm the development was not successful as calls put across to Dr. Muideen Akorede, spokesperson of Governor Ahmed shows that his mobile phone number was switched off.