Home » Gist » We Rape Female Victims Who Have No Money – Suspects 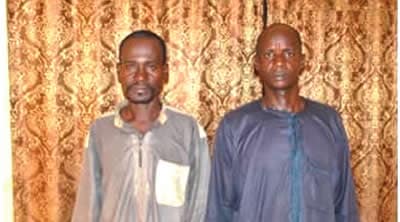 The policemen attached to the Kataeregi Division in Katcha Local Government Area of Niger State, has arrested two suspected armed robbers in connection with a sexual assault on a 34 year old woman in Gadan Eregi, Fulani Camp along the Bida Road, Niger State.

Northern City News revealed that the suspects who were identified as Umar Audu (50) and Umar Mohammed (40), both of Gadan Eregi, Fulani Camp, were arrested along the Bida Road.

Further report revealed that the suspects, who reportedly attacked their victim with a cutlass and stick, demanded N400,000 from her.

When she failed to meet their demand, they dragged her into a nearby bush and forcefully had sex with her.

One of the suspects, Audu, claimed that they usually rape their victims who fail to give them money.

He said, “If we stormed any house and the occupants refused to give us a substantial amount of money, we would have sex with any female we found in that house as compensation. We don’t care how young or old; once our victim did not give us reasonable money, we are bound to perform the act.

“If our victim is headstrong or refuses to part with money, we have no option than to have sex with his wife or daughter.”

The Niger State police spokesman, Muhammad Abubakar, stated that the suspects had confessed to the crime, adding that they would soon be charged to court.