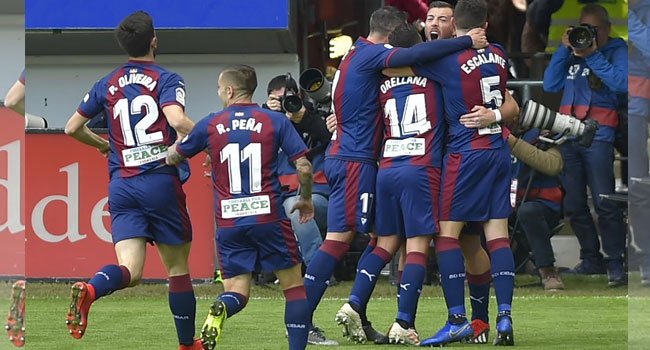 Santiago Solari proved the perfect caretaker but his debut as permanent coach of Real Madrid on Saturday ended in a disastrous 3-0 defeat at Eibar, Naija News Understands.

💬 Solari: "We didn’t play at all well and we’ve got to work hard to resolve it." #RMLiga pic.twitter.com/mWREUE7F0w

Four wins while in temporary charge earned Solari a contract until 2021 over the international break, only for Real to revert to the kind of chaotic display that caused his predecessor, Julen Lopetegui, to be sacked.
The defeat also brought into focus the mindset of Madrid’s players, after their captain Sergio Ramos faced allegations of an anti-doping violation on Friday night from German magazine Der Spiegel. The club denied any breach.

“We admit that we didn’t play well,” Solari said. “We have to work to improve and to correct our mistakes. It was a tough loss, we didn’t expect it.”

Solari was given a permanent contract before the international break after replacing Lopetegui. He revamped the squad and put it back on track in the Spanish league and the Champions League, quickly gaining fans’ approval. The former midfielder was picked among candidates that reportedly included Antonio Conte and Roberto Martinez.

Madrid had outscored opponents 15-2 in the four wins under Solari, who took over with the team ninth in the league. Madrid’s last game under Lopetegui was a 5-1 loss at Barcelona.

Saturday’s defeat left Madrid with one of the league’s worst defenses with 19 goals conceded. Only three teams have conceded more than Madrid — Celta Vigo, Rayo Vallecano and last-place Huesca.

Eibar moved two points behind Madrid after its second win in three matches.

“We scored three goals against one of the best teams in the world,” Sergi Enrich said. “We’ve been after this victory for a long time and now we’ve got it.”

The hosts opened the scoring through Gonzalo Escalante after a quick counterattack in the 16th minute. Madrid goalkeeper Thibaut Courtois made an initial save but Escalante got to the loose ball and easily found the net from close range. The goal was confirmed by video review.

Enrich added to the lead early in the second half after a defensive mistake by Madrid right back Alvaro Odriozola, who had the ball stolen from him near the area in the play that led to the goal. Kike Garcia got the third five minutes later after Madrid’s defense again couldn’t clear a ball crossed into the area at Ipurua Stadium.

? @raphaelvarane: "We have to stick together and improve to get back to winning ways." #RMLiga pic.twitter.com/2ByF3Lw4eB

Madrid’s next game is at Roma on Tuesday. The two sides lead Group G in the Champions League.