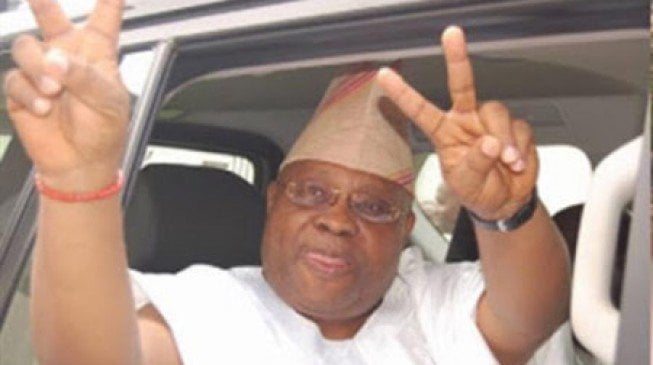 Three members of the Peoples Democratic Party in Osun State, has been put under investigation for possible sanction following their suing of the party’s governorship candidate in the state’s election, Senator Ademola Adeleke, over alleged fake certificate.

The party’s member under investigation in accordance with the party’s constitution, are Olalekan Awosiyan, Thomas Ojetade and Sina Awodire,

The zonal Secretary of the party, Rev. Bunmi Jenyo, while speaking with newsmen in Ibadan on Thursday, stated that the members had “employed blackmail to destabilize the party for reasons best known to them.”

Jenyo, who said the zone would soon recommend the alleged culprits for disciplinary action, used the occasion to dispel the claim by Ojetade that he (Jenyo) threatened him to withdraw from the suit they instituted against Adeleke.

The PDP scribe, in company of another witness to the peace accord, a Senatorial Youth leader, Osun East, Mr. Kazeem Ogunsola, claimed that Mr. Ojetade willingly agreed to withdraw the suit following a peace meeting initiated by the zonal chairman, Dr. Eddy Olafeso, and was never at any point pressured to so do.

According to Jenyo, “Having been instructed by the leadership of our party in the South West under the chairmanship of Dr. Eddy Olafeso, to investigate the matter and resolve it amicably, I went to lle-Ife on Friday, November 16th to hold meeting(s) with the petitioners.

“I could not locate all the three petitioners in the suit until the intervention of Ife Federal Constituency candidate, Hon. Abimbola Ajilesoro, who connected me with Osun East Senatorial Youth Leader, Mr. Kazeem Ogunsola, who brought one of the petitioners, Mr. Ojetade Thomas, to the house of Hon. Ajilesoro in Parakin, Ile-Ife on Saturday 17th November, 2018 morning.

“I was invited to discuss with Mr. Thomas Ojetade and Mr. Kazeem Ogunsola at the venue, but the meeting could not hold due to the inconducive atmosphere as a result of the various political activities at the house of the House of Representatives candidate.

“So, Hon. Ajilesoro suggested that both persons follow me to my house in Abere, Osogbo for a peaceful meeting.

“Mr. Thomas Ojetade, who happily agreed, also called another plaintiff in the suit, Mr. Awodire Sina Peter, who also promised to join us in the course of the meeting. The latter, however, did not show up while the meeting lasted.

“After a lengthy discussion, he felt sober and apologised for roles played in the case. As a result, he voluntarily agreed to withdraw from the case with immediate effect, in the interest of the party.

“It was at that juncture that he had to speak with the lawyer, Mr. Temitope Elusogbon, who prepared the affidavit, on the telephone.

“He signed the document in front of me and Mr. Kazeem Ogunsola and promised to come alongside the Youth Leader to court on Monday, November 19 for further processes to finally withdraw the case for out-of-court settlement.

“He asked for financial compensation for his efforts and further discussions were mutually agreed to be shifted till Monday, after court sitting.

“Obviously, the meeting was peaceful, no interference whatsoever, it was only three of us.

“I instructed my driver to drop him at the garage and offered him N6,000 (six thousand naira) only for his transportation back to Modakeke, his abode.

“I am particularly surprised to receive a phone call from one Inspector Emmanuel who asked whether I threatened him to sign the document.

“I, therefore explained to him (Inspector Emmanuel) that the concocted story of a police pointing gun at his head never arose. Indeed, no policeman or any other person attended the meeting but the three of us only.

“Another surprise was a Press Conference he addressed in Osogbo on Tuesday where he wrongfully accused my personality of threatening him and his family.”

Also, Ogunsola confirmed that Ojetade signed the document without any threat whatsoever, saying “No one threatened him. I can say this anywhere and anytime. He himself knows the truth. He should not allow himself to be used in Osun PDP.”

The three PDP members had, on 30 October, 2018, approached a high court sitting in Osogbo, contending that the participation of Senator Adeleke and his return as the winner of the party’s governorship primary held on 21st July, 2018, “for the purposes of electing the gubernatorial candidate of the party and his subsequent participation in the governorship election of the 22nd September, 2018 as the party’s candidate was null and void on the account of false information and submission of false documents to electoral commission.”