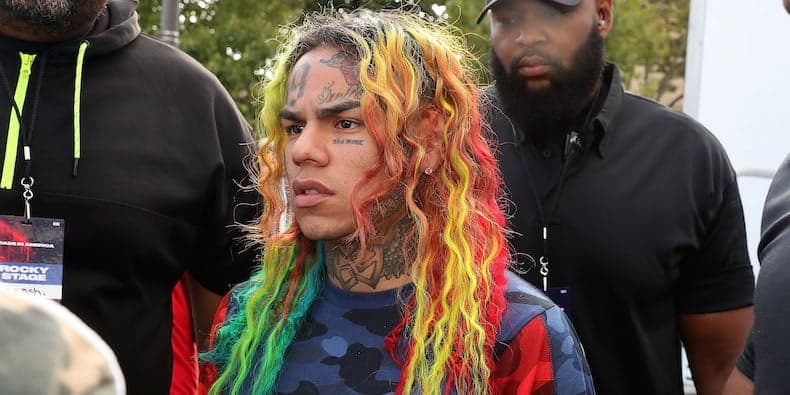 According to NBC, American rapper, 6ix9ine, was on Monday denied bail after a prosecutor stated that there was evidence that he directed or participated in multiple acts of violence as part of a deadly gang.

The rapper and his team members were yesterday arrested in New York on federal charges.

NBC is reporting that U.S. Magistrate Judge Henry B. Pitman, concluded an hour long hearing by citing “troubling” corroborating evidence offered by a prosecutor to show that 6ix9ine directed or participated in multiple acts of violence over the last eight months.

The rapper and his associates were reportedly part of the Nine Trey gang, who “wreaked havoc on New York City, engaging in brazen acts of violence,” federal prosecutors said.

Assistant U.S. Attorney Michael Longyear added that a backpack stolen during a gunpoint robbery in April was found during a raid at 6ix9ine’s Brooklyn residence, along with an automatic pistol.

“The defendant is quite violent,” the prosecutor said of 6ix9ine, adding that 6ix9ine was captured on surveillance video as he sat in a car and filmed the scene in Times Square when his co-defendants carried out a violent robbery against a rival gang member.

The prosecutor further added that the rapper was also part of a video boasting about shots recently fired by a co-defendant in Brooklyn’s Barclays Center.

Longyear also said the rapper was a threat to flee because of his worldwide connections, hundreds of thousands of dollars in cash and the knowledge that a conviction would bring a mandatory minimum sentence of 32 years in prison and as much as life.

And it was for this reason that the judge ordered that the rapper be held until a Tuesday bail hearing, saying he was concerned about the danger to the community, particularly because the rapper could direct others to carry out acts of violence.