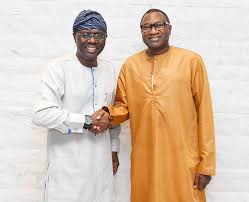 Billionaire oil businessman, Femi Otedola, has on Saturday, declared his support for Babajide Sanwo-Olu, the governorship candidate of the All Progressive Congress (APC).

According to the post, both men had dinner at the residence of the billionaire oil magnate on Friday evening.

In the post, the businessman, while describing the governorship candidate as his “childhood friend”, said “Dinner at my residence yesterday evening, with my childhood friend APC Governorship Candidate @JideSanwoOlu. GOVERNOR IN WAITING!,” Otedola captioned the picture.

After a video emerged online showing Otedola taking Molue from Sango in Ogun state to Agege in Lagos, rumour followed that the son of a former governor of Lagos State was making preparation to contest for the governor of the state.

However, the business man refuted the rumours making the round, stating that he took the ride to share in the experience of the common man.

He also trended on Instagram in April after he posted a video of him on a bus in London “to see my old teacher at Wandsworth”.