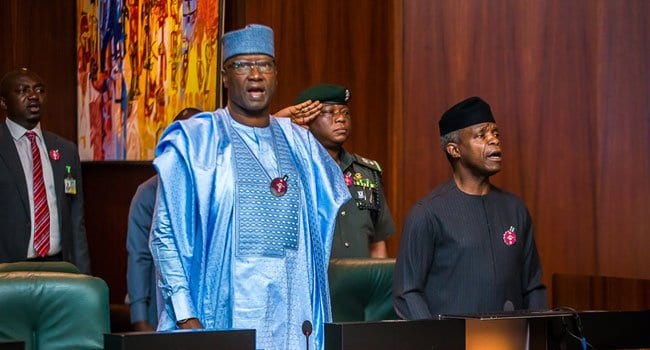 The federal government has approved N60 billion in support of its rice subsidy programme aimed at bringing down the price of the commodity across the country,Naija News Understands.

The Minister of Agriculture and Rural Development, Audu Ogbeh stated this when he briefed State House correspondents on the outcome of the meeting of the National Food Security Council.

Audu Ogbeh said there might be rice shortage in 2019 due to flooding.

The meeting was presided over by President Muhammadu Buhari at the Presidential Villa, Abuja, on Friday.

He disclosed that a committee would be constituted by the ministry of agriculture in collaboration with ministry of finance for smooth implementation of the rice subsidy programme.

“There is a subsidy programme coming up. Government has approved some money, N60 billion to support the rice industry to bring down prices. But we are going to handle it differently.

“We don’t want to get into petroleum subsidy problem, so a committee is looking at it with the ministry of finance.

“We think that it is better for us to loan money to the millers, farmers and distributors at a very low interest rate, so that the capital doesn’t disappear, and if they have cheaper credit to do their business that should impact on the price of rice in the market.

“Every country does it for food, we will use a different method to do it and it will be cheap credit to the farmers, millers and the marketers, not outright cash subsidy for their product,’’ he said.

Mr Ogbeh, who announced that the Bank of Agriculture would soon be restructured, expressed the hope that farmers would be able to buy shares in the bank after the restructuring exercise.

The minister also expressed optimism that the restructuring process would bring down the bank’s interest rates to five per cent.

He added that the objective was to make agriculture more attractive so that people could raise capital to invest in profitable business ventures.

“The Bureau for Public Enterprises (BPE) is about to restructure the bank of agriculture after which farmers are going to be able to buy shares in the bank, so eventually it will become the farmers bank.

“And we hope in the process that it will bring down interest rates reasonably maybe 5 percent or a little higher, so that agriculture will become attractive and people can raise capital to invest,’’ he said.

The minister revealed that the Council called for ban of fertilizer NPK 15-15-15, saying recent research had indicated that the fertilizer had no value for any crop or soil.

He said: “We call for the ban of fertilizer NPK 15-15-15 which has been used in the country for many years but recent research revealed its not useful for any crop or any soil.

“Soil differs and so does crop, to believe there is one uniform fertilizer you can spread for every crop is a fallacy.

“And it’s because we have done soil test and change the formulations of fertilizers, local blenders, that is why some of the yields we are getting now are rising from two tonnes per hectares to five and six.

“So, the president is looking into that and to see how we can deal with it.’’

The Deputy Chairman of the National Food Security Council and Kebbi state governor, Atiku Bagudu, who also spoke on the outcome of the meeting, said that the council may subsidize the price of rice with N5 billion.

He said the subsidy would enable Nigerians to buy rice at a cheaper rate during the forthcoming yuletide as obtained in 2017.

The governor dismissed the reports by the United States Department of Agriculture (USDA) World Market and Trade which suggested that Nigeria has been importing rice to the tune of about three million tonnes.

“Certainly, that is an erroneous report, in spite of the flooding the upland rice production has been quite strong this year.

“Even though prices have increase in response to flooding, we still have adequate paddy rice in Nigeria,’’ he said.