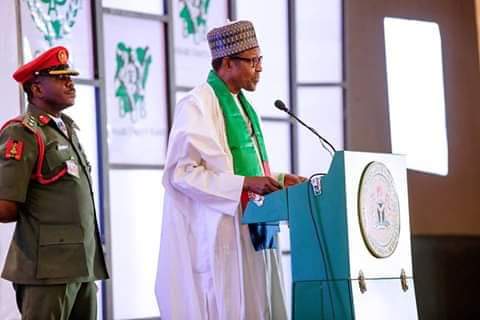 Naija News learnt that the President stated this earlier today while launching the “Buhari Unity Band” organized by the Good Governance Ambassador of Nigeria (GOGAN).

According to the President, “Our country has passed through difficult times, on occasions threatening the foundations of our unity, but with the help of God, we have always emerged from each crisis stronger.

“There is no doubt that we still have pockets of issues that question our unity but we are convinced that, with the determination of all Nigerians, we shall remain strong and united.

He described the Buhari Unity Band, as a “ visual and token symbol of our resolve to live in unity as one and to preach the message of unity wherever we live.

“ Those who subscribe to the unity wristband will be known as Nigerian Unity Ambassadors. You will be building on the legacy of a number of our patriots who have, in the past, sacrificed so much, some even their lives, in defense of our nation.

Leader of GOGAN , Felix Idiga in his opening remarks, said the President remained a symbol of Nigeria’s unity based on his achievements in office since 2015.

He cited the President’s decision to immortalize the presumed winner of the June 12, 1993 election, Moshood Abiola and the fight against corruption as part of the reasons for their decision.

Naija News also gathered that the unveiling/launching of the Buhari Unity Band was organized in collaboration with the Presidency.They described the event as an initiative of a group of patriotic and politically active Nigerians who believe in the unity of our country.

The event was part of GOGAN’s commitment to the sustenance of unity and mutual co-existence as one people united who shared history and shared destiny.

It was also said to be a demonstration of their determination to see Nigeria succeed as we come to agreement that no nation can truly make progress without unity.