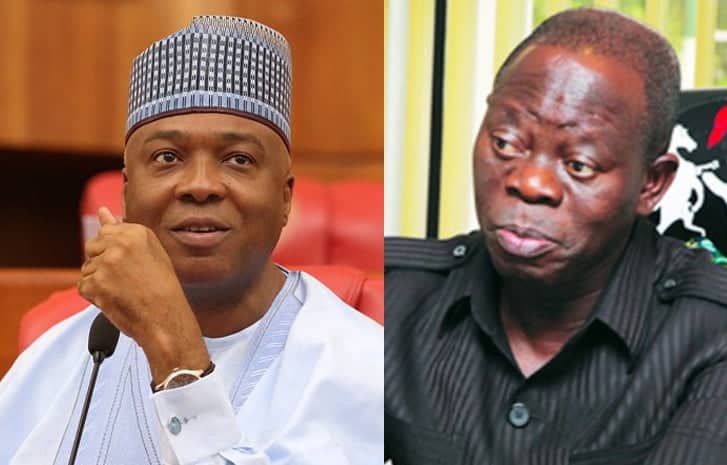 National Chairman of the All Progressives Congress (APC) Adams Oshiomhole has again taken to the media to stress that Senate President Bukola’s Saraki’s continued stay in office is unacceptable to the party.

The APC national chairman also said it would be strange if the ruling party is experiencing “graveyard peace,” against the backdrop of recent events in APC.

Oshiomhole said these when he appeared on Arise Television, yesterday and added that the APC is prone to controversies because it is a large party.

Recall that the party chairman was  last week, detained by the Department of State Services (DSS) and grilled for nine hours following allegations by some governors that he received bribes during the party’s primary elections across the country.

In his reaction, Oshiomhole said although the aggrieved members were allowed to grumble but the party has moved on and has put in place internal procedures for reconciliation.

“We have finished our primaries and we have submitted names to INEC and there are internal procedures for reconciliation and we are working on them.

“We are a large governing party and it will only be strange if we are having graveyard peace. People are allowed to grumble and grumbling is allowed. We should move on and find solutions.”

Asked whether the party still has plans to remove Saraki, he replied: “I think it’s about morality.

“We just had an election in the US. The democrats won more members in the congress. Without much ado, the leadership of the House changed. This question didn’t have to arise. Saraki belongs to a minority party; as it stands, today, in the senate.

“The truth about democracy is that it’s a game of numbers. It’s unacceptable that minority provides leadership over majority.”

Meanwhile Naija News reports that some lawmakers have suggested that the idea of impeaching the senate leader may be totally shelved.