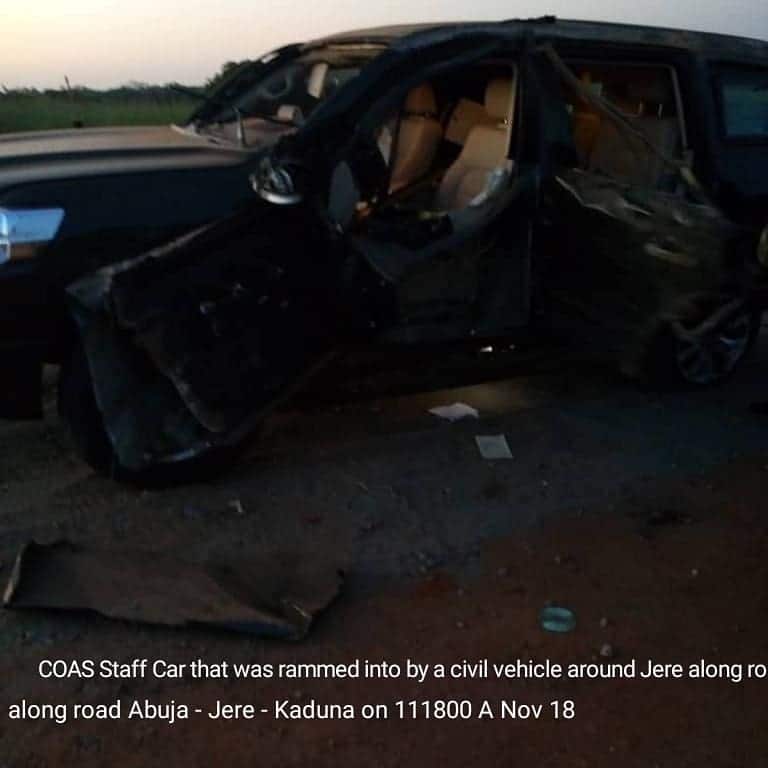 The official vehicle of the Chief Of Army Staff, Lt. Gen Yusuf Buratai was on Sunday, involved in a major accident along the way to Kaduna.

According to information gathered by Naija News, the accident occurred around 6:00pm on Sunday but Buratai himself was not in the vehicle.

His Aide De Camp, ADC was however, seriously injured and has been rushed to the hospital.

The incident was confirmed in a series of tweets on the official twitter handle of the Nigerian Army.

“The COAS’ official staff car had an accident at Jere town on the way to Kaduna today 11 November 2018 at about 6.00 p.m. The staff car was in a convoy along with other vehicles when a lone civilian vehicle veered off its lane and rammed into the staff car.”

“The COAS was not in the car. However, the ADC sustained minor injuries and has been evacuated to a nearby hospital for medical attention,” the army statement reads.

The COAS was not in the car. However, the ADC sustained minor injuries and has been evacuated to a nearby hospital for medical attention. This is for your information please. Pictures below. pic.twitter.com/gwkf2J5NJq

Giving an update of the accident on Monday, Army authorities said the driver of the civilian vehicle that caused the accident, according to preliminary reports, was discovered to be under the influence of alcohol.

JUST IN:The driver of the civilian car that rammed into the convoy of the COAS is presently receiving medical attention at a NA Medical facility. Case has been reported to Police and Investigation has commenced. Initial findings showed driver was
under the influence of alcohol

The matter has been reported to the police and investigation has commenced.