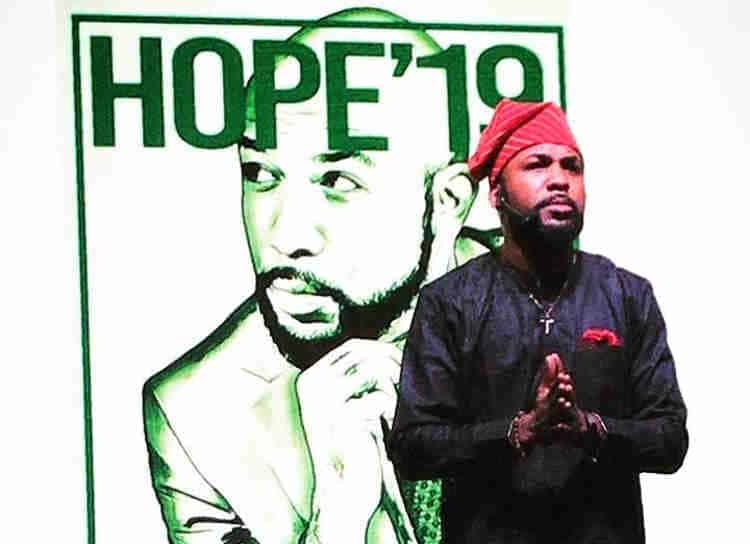 Talented Musician and actor, Olubankole Wellington, popularly known as Banky W has indicated his interest to vie for the Lagos Eti Osa Federal Constituency seat in the House of Representatives in the 2019 general election.

Empire Mates Entertainment (EME) boss made this disclosure at the debut convention of the Modern Democratic Party (MDP) in Lagos.

Although he acknowledged that he will be running against a formidable opponent, he, however, said he was certain of victory.

“It is with the greatest sense of humility, purpose and destiny that I humbly announce to run for the 2019 Federal House of Representatives.

“I am under no illusions that this run will be easy considering who we are going up against, this is almost impossible.”

NAN reported the award singer picked the slogan ‘Hope 19’ and entrusted the election process on ‘hope’.

“You see, my entire life has been a story of just dreaming dreams, praying about those dreams, setting goals and working until they come true. I can live with trying and failing, I can’t live with not trying.

“So why we may not have a godfather we do have God, vision, intellectual capacity, integrity, right intentions and last but not least, a whole lot of ‘Hope’.

Bank W revealed that those in his constituency were well to do people who were exposed and knew what they desire in term of representation.

He added that Eto Osa Constituency was important to Nigeria because of those who are residents in the area.

“We want to fix Nigeria, But we must begin by fixing our communities.

“Our generation needs a realistic rallying point, we need to begin in communities, earn our way into the system and up the ladder”.

Banky W joins some entertainers and celebrities who have declared to run for public offices in the 2019 general election including Kanayo O, Kanayo and Shinna Peller