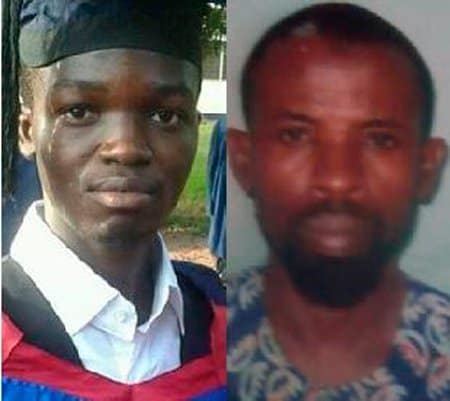 How Lawyer, Son Of ASUU, LASU Official Died At 25

Usaamah was killed alongside a motorcyclists on Sunday night in a road crash at Volks bus stop on Lagos-Badagry Expressway.

The okada rider and Usaamah were  reportedly hit by a trailer while trying to avoid an oncoming Sport Utility Vehicle (SUV) that drove against traffic.

“The reckless SUV driver drove the wrong way to avoid heavy traffic on the other lane. The okada rider, in a bid to avoid head on collision with the SUV, unknowingly turned to a speeding trailer. That man (Usaamah) and the okada rider were hit by the trailer. Both of them died on the spot,” an eyewitness told The Nation.

According to Adebanji Adeyemi, a PhD student and friend of Dr Adenowo, a soldier saw Usaamah’s Identity Card, traced the address on it to his home to inform his parents.

“The okada rider has been buried. Usaamah was buried earlier today (yesterday) at Isashi in Ojo Local Government,” he said.

Adeyemi, who taught the late Usaamah English language at Vanguards Academy, a secondary school in Ijebu-Ishiwo, Ogun State, described him as a gentle and intelligent person.

The late Usaamah was called to Bar in 2015 after his Law School Programme in Adamawa State. He did his National Youth Service Corps (NYSC) in 2016 in Imo State.

“But death has no feeling or concern for academic pedigree. Its irresistible fingers spare no mortal. This young charming lawyer is the first son of his parents. That Usaamah has now gone to a world of no return. Why will death take a child and spare the parents? Parents who are older, more travelled , have been enjoying life! It is because age is not the parameter for death,” Vanguard Academy Director Dr Zafaran Adeniyi said.

Adeniyi described the late Usaamah as an icon.

“He was always smiling. He was a great son, a student determined to live for the mission of his parents and teachers. No elder or associate could fault the humility of Usaamah. He was always seeking to know. He practiced what he knew even if the whole world moved in a different direction,” he said.

The late Usaamah’s friend, Abdullah Oduwole, who spoke with him before his death, described the news as shocking.

“As I was about to sleep, my phone rang. And the caller said, ‘I just heard Usaamah just died.’ ‘Let me confirm, we chatted during the day’ I replied. As I called to confirm the story, I was shocked,” he said.

Oduwole, in his tribute to him, wrote: “So humble and principled; He was so calm and would make his point known in a subtle way. He would always strive hard to practise what he had learnt. He never used abusive words or castigated anybody. He was my General Secretary while I was the President of VAOSA .

“He was always careful of not hurting others’ feelings. He was quick to apologise and he would never expect compliments.

“He won several awards and held many posts. He travelled to Adamawa for his legal training at Law School. Death didn’t take him. He was in Imo State plying that road several times because, at that time he was Secretary of Muslim Corpers’ Association of Nigeria (MCAN) for the whole Southeast, that necessitated a lot of trips. Death didn’t take him. He was ill for a long while, death spared him then. He died while just stepping out of the house to go out. He had gone not to be seen again.”