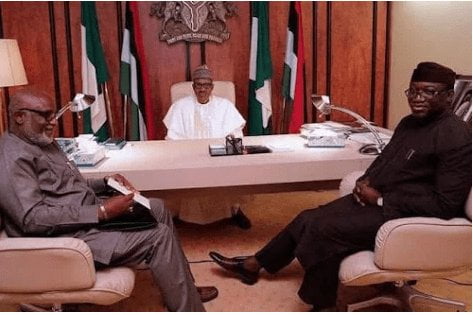 President Muhammadu Buhari has met with three state governors of the All Progressives Congress (APC) from the South West geo-political zone at the Presidential Villa, Abuja.

Sebi you came to Ekiti to boast that "a maa ja gba in" (we will take power by force)? So what happened in your own Ogun?

Naija News learnt that the affected governors, Ibikunle Amosun of Ogun, Rotimi Akeredolu of Ondo and Kayode Fayemi of Ekiti had closed door meeting at the President’s office as part of Buhari’s efforts to reconcile all aggrieved members of the party.

It would be recalled that the President had on Wednesday met behind closed door with Asiwaju Bola Tinubu, the National Leader of the APC and the party’s National Chairman Adams Oshiomhole, at the Presidential Villa, Abuja.

The President’s meeting with the APC leader and Oshiomhole  came less than 24 hours after Buhari hosted aggrieved APC aspirants  to a dinner at the State House. The meetings were also part of the president’s reconciliatory efforts aimed at ensuring victory for the party in the 2019 general elections.

Senator Ibikunle Amosun with his Ekiti and
Ondo State counterpart today at the Villa with
President Muhammad Buhari. pic.twitter.com/mq2i80BJMF

The outcome of Sunday’s meeting between the president and the three governors had not been made public as at the time of filling this report.