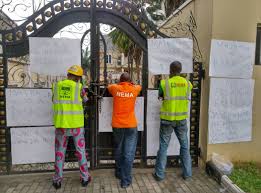 The United Labour Congress of Nigeria (ULC), has on Wednesday, described as ridiculous the N22,500 national minimum wage offer by the Governors’ Forum to workers.

According to ULC, the proposal by the state governors contravenes principles and spirit of social dialogue as envisioned by the International Labour Organisation (ILO) conventions.

The body stated that i reverses itself by rejecting the N30,000 agreement with the government to its initial N65,000 demand.

ULC revealed further that it was ready to embark on a nationwide strike on Tuesday.

The president of the ULC, Comrade Joe Ajaero described the amount proposed by the governors as ridiculous and disdainful, adding that the proposal have shown that the governors takes for granted the workforce that create wealth for the country.

Ajaero also alleged that the government were out to ridicule the desire and right of Nigerian worker to demand for a decent wage via a new minimum wage.

READ ALSO  #2019: Buhari To Flag Off Campaign In Akwa-Ibom

“Since the government which is a major stakeholder in the Tripartite Committee has reneged on the agreement repudiating its earlier documented offer, ULC in conjunction with other labour centres, rejects the N30,000 compromise figure of the Tripartite Committee and now insists on our original collective demand of N65,000 as an irreducible minimum.

“The only figure that we now recognise is N65,000 or nothing else. This shall be the focus of our demand as we move into the nation-wide strike come Tuesday, the 6th day of November, 2018,” ULC said.

According to ULC, “the deployment of the subterfuge called the Governors’ Forum to disrupt and hijack the due processes known to the nation’s Industrial Relations space in reaching a new minimum wage for workers”.
ULC said this was despite the fact that the governors were fully represented in the Tripartite Committee by six of them.

“Going outside the known framework to seek the resolution of the contrived Minimum Wage impasse is devious.

“It undermines Tripartism and the various traditions that govern responsible and equitable engagement of the social partners – workers, employers and government.

“A sensitive government is not expected to reject tested and proven frameworks and processes for civil engagement but this is what this government has chosen to do.

“It is unfortunate that this government would rather seek ways of keeping workers at the periphery of the nation’s economy.

“Drafting in that inglorious political forum at this time is a clear sign that government is prepared to continue politicising the right of workers to an acceptable wage floor thus exacerbate the marginalisation and exploitation of Nigerian workers and masses. This is deplorable.

“All Nigerian workers should remain alert! Gird your loins and be ready as we go into the Joint CWC and the final days of preparation to grapple with the looming oppression,” Ajaero said.

The Nation report that Ajaero assured Nigerian workers that the ULC will continue to fight for their interest by ensuring that the government yet to their demands for a batter wages package.