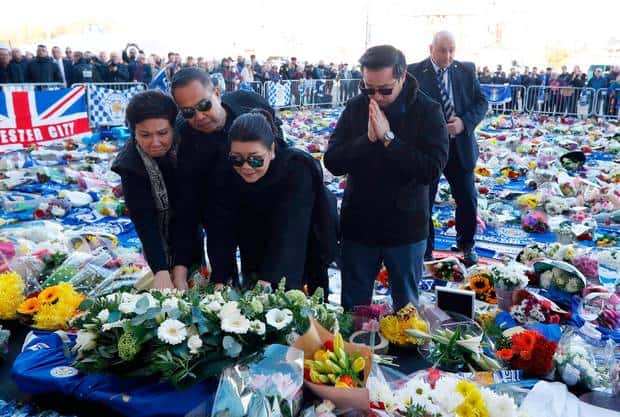 Family Members Of Vichai Srivaddhanaprabha Pay Tribute To Him

The family of the late Thai billionaire boss of Premier League club Leicester City paid tribute to him today at the site where his helicopter crashed as investigators began examining the aircraft’s black box.

Vichai Srivaddhanaprabha’s son and widow were seen laying a wreath among a sea of tributes from fans outside the stadium, including flowers, football scarves and Buddhist statues.

Air accident investigators also on Monday said they had recovered the helicopter’s digital flight data recorder, which was subject to “intense heat” in a fire after the crash.

“Today our inspectors.. will start working on the recorder,” the Air Accidents Investigation Branch said in a statement.

Along with other family members and executives from King Power, the two were also seen laying wreaths at the crash site in a car park near the stadium, which is still cordoned off as air accident investigators pick through the wreckage.

Others who died in the helicopter crash include two members of Vichai’s staff, Nursara Suknamai and Kaveporn Punpare, pilot Eric Swaffer and the pilot’s girlfriend, Izabela Roza Lechowicz, also a pilot.

Nursara Suknamai was an actress and a runner-up in Miss Thailand Universe in 2005.

Vichai, 60, a regular at matches who used to fly to and from home games, was much-loved in the city as the driving force behind the club’s historic 2016 Premiership victory.

His blue helicopter took off from the pitch after the stadium emptied following Saturday’s 1-1 draw with West Ham, but crashed moments later in the car park.

Earlier British Prime Minister Theresa May and Prince William, who is president of the Football Association, offered their condolences over the crash.

“I was lucky to have known Vichai for several years. He was a businessman of strong values who was dedicated to his family and who supported a number of important charitable causes,” said William, the Duke of Cambridge.

“He made such a big contribution to football, not least through Leicester City’s magical 2016 season that captured the imagination of the world.

“He will be missed by all fans of the sport and everyone lucky enough to have known him.”

May said her thoughts were with the family and friends of the victims as well as supporters of the club.

“The outpouring of grief is a testament to how many people’s lives were touched by those on board,” she said in a statement.

Vichai bought Leicester City in 2010 and became chairman the following February, pouring millions into the team and becoming a beloved figure in the club and the city — a feat rarely achieved by the Premier League’s foreign owners.

It was under Vichai’s ownership that Leicester crafted one of the biggest fairytales in English football history by winning the 2015/16 Premier League, having started the season as 5,000-1 outsiders for the title.