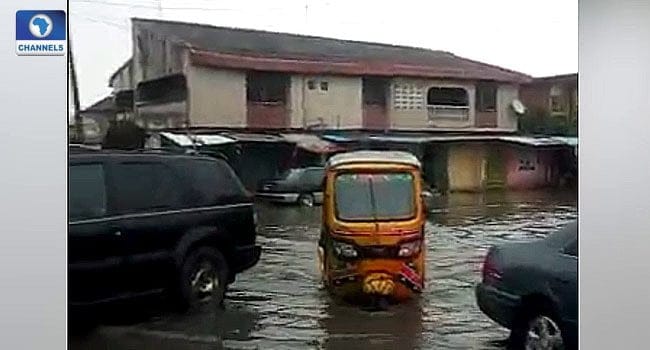 Residents of Aboru in Alimosho Local Government Area of Lagos State today woke up to count their loses from heavy rain that lasted from Sunday night to early hours, wrecked many of their property.

The News Agency of Nigeria reports that the flood episode has caused residents sleepless nights.

It was observed that residents stood in batches at the frontage of their houses and shops lamenting the havoc caused by the rain while some were seen carrying belongings affected by the rain outside.

Many fences were pulled down while the entire Aboru Road in Iyana-Ipaja was filled with mud and garbage moved to the area by the flood.

Many of the residents and shop owners who spoke with news Men linked the recurring flooding to the alleged abandoned bridge connecting Iyana-Ipaja to Aboru, saying the bridge was taking much water than it could.

According to them, whenever it rains, not only in the area but also in other places like Abule Egba, Abattior in Agege, the water being channeled to the bridge affect residents of the area.

An elderly landlord, Mr Solomon Egbodhoroma said that the people in the area had been suffering because of the abandoned bridge.

He alleged that what the government constructed was a culvert and not bridge.