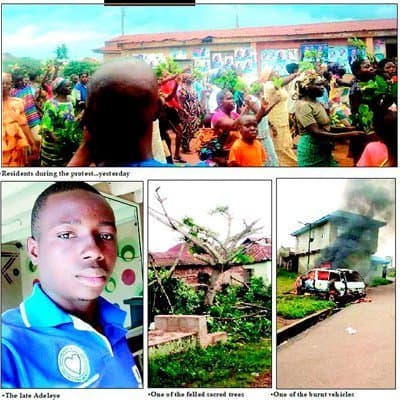 Violence rocked Ilogbo-Ekiti in Ido/Osi Local Government Area of Ekiti State yesterday when residents chased their monarch, Oba Edward Ajayi, and members of his family out of the town.

This is as the residents accused the monarch of aiding and abetting cultism.

Vehicles and other property were vandalised in the riot that erupted on Tuesday night.

The subjects said many residents were attacked by suspected cult members allegedly led by a son of the traditional ruler, Adeleye Ajayi.

They claimed that the attack by the suspected cultists led to the death of a 17-year-old boy, Bolu Adeleye, in the community.

An indigene of Ilogbo, who addressed reporters in Ado-Ekiti, the state capital, on condition of anonymity, said the community had reported the alleged activities of the monarch’s son to his father, whom they accused of treating the matter with levity.

Another resident claimed that Adeleye was expelled from a university in Ondo State for alleged cultism about five years ago.

“The prince and his group have been terrorising our community with the shield and protection of the palace.

“The people were forced to violence because of failure of the Oba to put his child and his group under check. The death of the boy sparked the riot.

“Sacred trees usually cut when a king dies have since been cut down while the palace and Oba’s cars were vandalised.

“Seven persons, including the Oba’s son, have been arrested in connection with the incident while the body of the slain boy has been deposited at a mortuary.”

Efforts to speak with Oba Ajayi proved abortive last night. His phone was switched off,  but Police spokesman Caleb Ikechukwu, a Deputy Superintendent of Police (DSP), confirmed the arrest of the suspects.

He disclosed that the incident was still under investigation.

The violent protest continued last night at Ilogbo-Ekiti on the killing of Bolu Adeleye by suspected cultists.

The protesters marched round the town, demanding justice for the deceased, paralysing transportation, social and commercial activities.

The protesters warned the police against sweeping the killing under the carpet.

They accused Adeleye Ajayi of leading the suspected cultists in the attack that led to Bolu’s death.

Seven suspects, including the monarch’s son, one of the traditional chiefs and his son have reportedly been arrested over the incident.