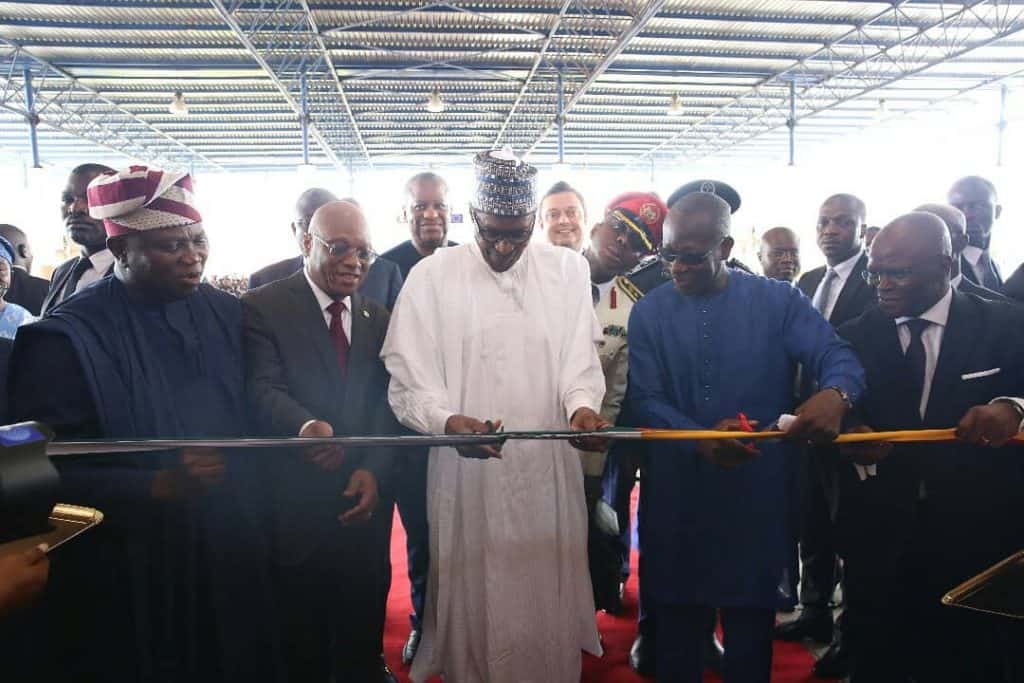 President Muhammadu Buhari has said the establishment of the Seme Joint Border Post will certainly promote Nigeria and the Republic of Benin’s brotherliness and common interest.

This he said at the inauguration of the border today in Lagos.

His statement: Let me first begin by congratulating the people of Nigeria and Benin as well as the whole West African Community on this significant landmark handing over of the newly improved SÈMÈ-KRAKÉ Border Post.

Indeed, the SÈMÈ-KRAKÉ Joint Border is one of the busiest boundary lines not only in West Africa but the whole continent, daily recording huge movement of persons, goods and services. Permit me therefore to congratulate my brother, President Patrice Talon of the Republic of Benin on the successful completion of this magnificent project. As we all know, Nigeria and Benin share many things in common. Hence, the establishment of the Joint Border Post will certainly promote our brotherliness and emphasize our common interest.

I would like to express the appreciation of the Federal Republic of Nigeria to the ECOWAS Commission for its contribution to this important project, which has made the completion possible.

In the same vein, our profound gratitude goes to the European Union Commission for their financial commitment to the success of this laudable project.

I am aware that the European Union supported two other Joint Border at Malanville (between Benin/Niger) and Noepe-Akanu (between Ghana/Togo). As the Chairperson of the ECOWAS Authority of Heads of State and Government, I once again express our appreciation to the European Union for believing in our region.

As you are aware, our region is suffering from inadequate transport infrastructure and inefficient services, which is one of the major bottlenecks to the attainment of socio-economic development and integration. ECOWAS is a region where Ports, Roads, Railways and Airports still remain a constraint despite significant recent progress made.

Nigeria has embarked on major investment programmes covering these sectors to improve the competitiveness of our economies and accelerate growth. We are therefore delighted to welcome such initiatives aimed at boosting the economic integration of our member States in West Africa.

In order to take up the challenges described, the ECOWAS Authority of Heads of State and Government had adopted in 2003, the road transport and transit facilitation programme, including the construction of Joint Border Posts across the sub-region.

These investments were launched to facilitate cross-border transportation and movement of persons and goods by removing non-tariff barriers.

The objective is to increase the competitiveness and efficiency of the main transport corridors in West Africa so as to boost international trade which is a key factor of growth and contributor to poverty alleviation.

The purpose of Joint Border Post implementation by the Community is to achieve greater trade facilitation by combining border clearance activities in a single location, to benefit from economies of scale, to simplify clearance procedures, to increase cooperation and coordination of controls, to foster data and intelligence sharing and to improve control against fraud and corruption.

I am delighted that the improvement in the SÈMÈ-KRAKÉ infrastructure that commenced in 2011 has been completed in an area which is approximately 17 hectares.

The Border Post is strategically important and lies on the Lagos-Cotonou-Lome-Accra-Abidjan corridor, which accounts for about 70% of the entire transit traffic in the sub-region. The corridor is also part of the Trans-African Highway network. This Joint Border Post with modern enabling facilities is a flagship project in ECOWAS and a good example of regional public assets with a spill-over range of benefits.

This Seme-Krake joint Border Post is a symbol of integration that brings together the peoples of Nigeria and Benin. I would, therefore, like to reassure you that Nigeria is committed to the operationalization of the Joint Border Post and will work closely with the Republic of Benin to ensure the success of this set of Border formalities.

I believe that this edifice would further enhance border officials working condition and would make them more efficient and effective in carrying out their duties. Though the operation on this facility shall be carried out jointly, I will like to urge them to ensure that their operations are carried out within the guiding principles of ECOWAS.

I am aware that a Joint Committee with membership from Nigeria and Benin has been established for the coordination and management of this facility. I would like to call on the members of the committee to note the complex task ahead of them. The committee must ensure that border officials are sensitized on the mode of operation of the Joint Border Post concept which is a big departure from the traditional mode of operation. I call on the ECOWAS Commission to continue to provide the needed support to this Committee.

Let me conclude by congratulating officials from the two countries for their commitment and active participation throughout the feasibility, design, construction and to now this operational stage of the facility. Your valuable contributions during these stages resulted in this beautiful infrastructure we have today. I hope to see the use of this border facility to enhance the free movement of persons and goods in our region.