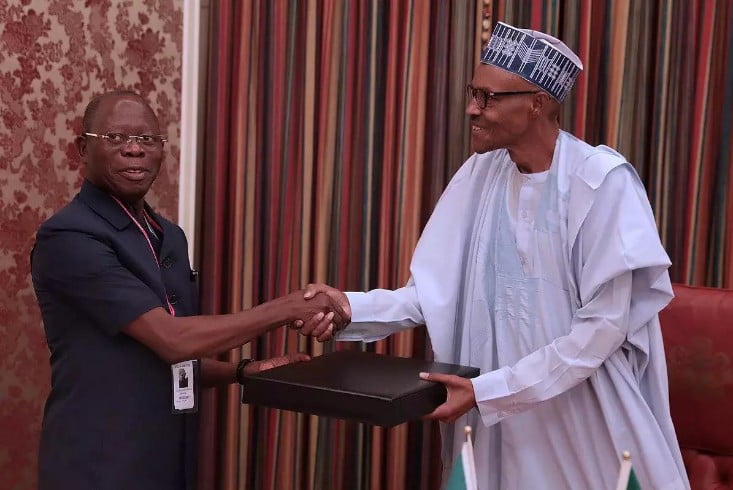 While aggrieved All Progressives Congress (APC) governors believed to be plotting the removal of Adams Oshiomhole, the party’s National Chairman are planning their next move, there are strong indications that they will compromise.

This is as Naija News learnt that President Muhammadu Buhari has disapproved of the alleged plot.

The governors, led by Governor Abdulaziz Yari of Zamfara State, who is the Chairman of the Nigerian Governors’ Forum (NGF); Governor Rochas Okorocha of Imo State; Nasir el-Rufai of Kaduna State, and Governor Ibikunle Amosun of Ogun State, were said to be at daggers drawn with Oshiomhole over the outcome of the party’s primaries in their states.

Aside this, Oshiomhole was said not to have been in the good books of some APC governors who were loyal to the immediate past national chairman of the party, Chief John Odigie-Oyegun.

It was alleged that the governors, who had reportedly infiltrated the National Working Committee (NWC) leading to a sharp division in the committee, were already gathering in Abuja to perfect their move.

It was also alleged that 15 of the 21 APC governors had collected signatures for his removal and were planning to converge on Abuja today to finalise the plot to remove him.

But, according to a source in the presidency, President Buhari was strongly opposed to any move by the governors and made his opinion known to them in clear terms.

According to him, the governors had been meeting with the president to register their grievances with the outcome of the primaries.

“But while the president gives them audience to express their feelings, he will eventually ask them to go to Oshiomhole to iron out their differences,” the source said.

He added that Oshiomhole was at the villa on Sunday where he met with the president, and that the president assured him of his full support while asking him not to be distracted but be focused on his mission of reforming the ruling party.

The source said the president also met with Oshiomhole on Monday evening though the details of the meeting were not known.

“What they don’t know is that Oshiomhole carries the president along in his day-to-day running of the party. Everything he sends out, the president approves of it. He is just laughing at the governors saying, ‘so, the rich can also cry’.

“As we speak, few of the governors who are hell-bent on removing Oshiomhole are in Abuja, but they are afraid of doing anything.

“All of them are hiding now, including the anti-Oshiomhole NWC members. None of them has come out to counter the statement issued by the national chairman,” the source said.

Speaking with Daily Independent , Prince Tony Momoh, one of the national leaders of the ruling party, said though many of the party members were aggrieved due to the outcome of the primaries, the issue would be managed such that it won’t lead to Oshiomhole’s removal from office.

His words: “If a group of people are ganging up against someone, they must have their grievances. The chairman of APC is a creation of the law, APC constitution.

“How he got there is in the party’s constitution and how he can be removed is also there. If there is any gang-up against him, it can only bear fruit if the conditions are met. Otherwise, they can’t succeed.

“A lot of people, after the primaries, are aggrieved and one of the outcomes of that is the extreme measure of threat of removal of the chairman.

“But there are several ways of resolving issues and any of these ways can be resorted to. Removal is an extreme measure, but I don’t think it will get to that. Even if that will happen, it will be in accordance to due process.”

Also on Monday, Simon Ebegbulem, Oshiomhole’s Chief Press Secretary (CPS), issued a statement withdrawing the earlier one he issued on Sunday in which he claimed that some powerful stakeholders were ganging up against his principal and plotting to pass a vote of no confidence in him.

In the statement, he also claimed that some of those not happy with the reforms being carried out in the party by members of the current National Working Committee were plotting Oshiomhole’s removal as Chairman.

According to Ebegbulem, the earlier statement was not authorised by the chairman.

The statement partly read: “On Sunday, October 21, 2018, I issued a statement on alleged plans by some stakeholders to move against the leadership of the Comrade Adams Oshiomhole led All Progressives Congress (APC).

“I want to state categorically that the statement was not authorised by my principal, Comrade Oshiomhole, and I hereby withdraw the statement. I deeply regret the error.

“As APC Chairman, Comrade Oshiomhole is enjoying the maximum support of stakeholders of the great party as shown by the reality on the ground.

“Comrade Oshiomhole will speak on the issues affecting the party when there is the need to do so. Meanwhile, he is busy giving leadership as the party girds its loins for the 2019 elections.”