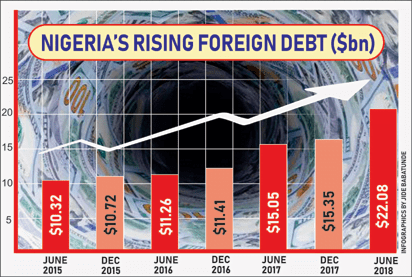 The Senate and Nigeria Sovereign Investment Authority, NSIA, has pleaded with the Federal Government against returning the country into a debt trap.

Stop Borrowing, Senate, NSIA, Ebis Others Warn FG
==========
Like the beggar sitting on top of a box of gold and still begging. Incompetence can erode critical, strategic and technical thinking needed to harness our resources as a Nation.

It will be recalled that the Senate recently approved President Muhammadu Buhari’s request for $2.78 billion Eurobond, but reiterated concerns of international financial institutions such as IMF and World Bank over rising public debt in Nigeria.

The NSIA also warned that it is suicidal for the nation, the states and some businesses in the country to borrow dollar-denominated funds from the international financial market to finance infrastructure development in the country.

However, the Senate’s approval for the issuance of $2.786 billion from the international capital market was as contained in the 2018 Appropriation Act.

It also approved the issuance of $82.54 million to refinance the balance of $500 million matured Eurobond in the international capital market and advised the Federal Government to do everything possible to reduce or limit its request for more external borrowing and source other means of generating revenue internally.

According to the Senate, this will help avoid a cleverly managed re-conquest of the country through a debt overhang.

Resolutions of the Senate were sequel to the consideration of the report on the new external capital raising presented by Chairman of the Committee on Local and Foreign Debt, Senator Shehu Sani (APC, Kaduna Central).

Presenting the report, Senator Sani said: “That the issuance of both USD2.786 billion and USD 82.54 million from International Capital Market is for the part- financing of 2018 Budget, with particular interest to finance key infrastructure projects proposed in the 2018 Budget.

“The committee also observed that the capital raising of USD2.786 billion will result in a portfolio mix of Domestic Debt- 68 percent and External Debt- 32%, which is an improvement over the ratio of 70:30 as at June 30,2018. This brings the debts portfolio mix closer to the target of 60:40.

“The committee further observed that the issuance of these bonds will contribute to the implementation of the Debt Management Strategy which seeks to reduce the cost of borrowing, lengthen the maturity of the public debt stock, free- up space in the domestic market for other borrowers and help to increase Nigeria’s external reserves.

Meanwhile, the Managing Director of Nigeria Sovereign Investment Authority, NSIA, Mr. Uche Orji, yesterday, warned that it was suicidal for Nigeria and some businesses in the country to borrow dollar-denominated funds from the international financial market to finance infrastructure development in the country.

Speaking at the just concluded Nigerian Gas Association, NGA International Conference and Exhibition in Abuja, Orji disclosed that the NSIA, which is the manager of Nigeria’s Sovereign Wealth Fund, SWF, took that path in the not too recent past and was yet to fully recover from the crisis that the currency mismatch caused the organization.

Orji noted that Nigeria, and, indeed, other African countries, would not develop if they continued to borrow funds in dollars and other major international currencies to finance their infrastructure projects, whereas their revenues were in their local currencies.

He said:  “In terms of currency mismatch that necessitated the recent crisis that we are yet to recover from, why can’t you negotiate and price some of these things in local currency?

“It has been very interesting in the last five years, especially when we started getting involved in the gas sector.‘’The first investment  had its challenge. We would not like to do any like that again; we had to restructure.‘The main reasons that happened, is the issue of the mismatch in currency; there was also the issue of bad debt, payment terms were not adhered to; there were also environmental issues, with damages to pipeline. There were many challenges in the sector.

Orji also lamented the rate of gas flaring in the country, while  commending the Federal Government for introducing new tariff structure for gas flaring.

He explained further:  “It is quite disheartening to watch us flare gas as if it is useless. Every time you do that, it is equivalent to taking bundles of dollars to a stove and burning them.

“You cannot live in a country that is suffering from deforestation, yet we are flaring enough Liquefied Petroleum Gas, LPG, or gas equivalent that can create LPG in the market.”

Reacting to the development, President of Nigeria Labour Congress, NLC, Ayuba Wabba, advised the Federal Government to be careful on foreign loans and bonds to avoid unnecessary debt burden or traps.

Wabba said: “Even at our last National Executive Council, NEC, meeting, congress examined this issue of borrowing not only in Nigeria, but also the African continent as a whole.  We declared as that in the past six years, Sub Saharan African governments have issued $81 billion in bonds alone to investors hungry for yield.

‘’This is in addition to several loans and bilateral debts. Also, bond yield has now jumped from 6% to 16% interest. Public debt in Sub-Saharan Africa has climbed to 50% of GDP. The case of Zambia with 59% of GDP as debt should be an eye opener to African leaders.

“We added by urging African governments that with the hidden condition and terms of these loans now coming into the open, our leaders should understand that there is no free lunch anywhere, even in Freetown. So, we need to be careful as a country to avoid sinking back into debt trap.”