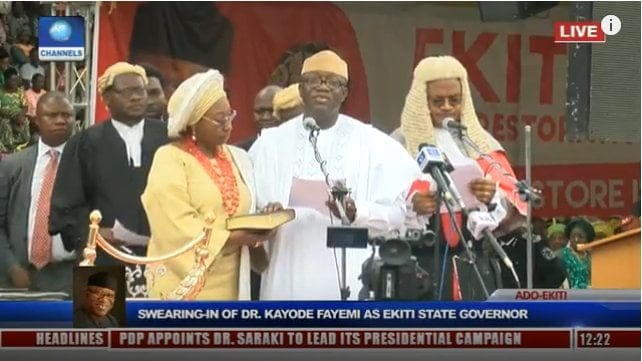 Mr. John Olukayode Fayemi, has been sworn-in as the Governor of Ekiti State. Fayemi would succeed Mr Ayodele Fayose.

The swearing-in programme was attended by notable Nigerians and chieftains of the All Progressives Congress. President Muhammadu Buhari was represented by the Secretary to the government of the federation, Mr Boss Mustapha. The National leader of the APC, Chief Ahmed Tinubu, the former chairman of APC Chief John Odigwe Oyegun, Governors Akinwumi Ambode of Lagos state, Rotimi Akeredolu of Ondo state, Nasir El-Rufai of Kaduna state and Abiola Ajimobi of Oyo-state to mention a few were all in attendance.

Fayemi’s deputy, Adebisi Adegboyega Egbeyemi, was the first to take the oath of office.

Afterward, at 12:22, the Chief judge of the state, Justice Ayo Daramola, took Fayemi through the oath taking process.

Fayemi a former minister of Solid Minerals Development has the chance to serve as the governor of Ekiti for a single-term of four years having earlier served initially for four years between the year 2010 and 2014.