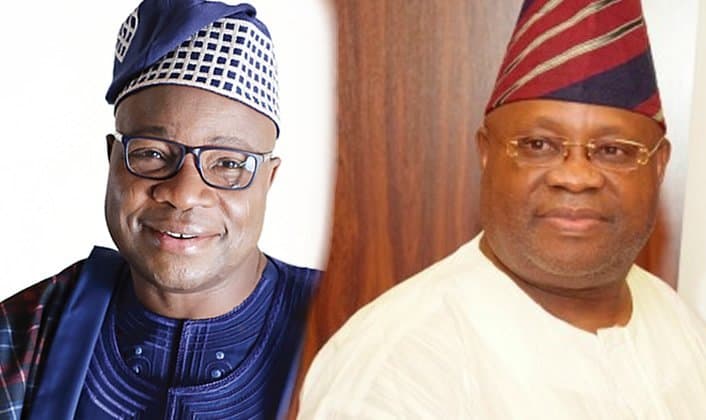 The former governorship aspirant of the Peoples Democratic Party in Osun State, Dr Akin Ogunbiyi, has accused the governorship candidate of the party, Senator Ademola Adeleke, of backing the Director General of the Adeleke Campaign Organisation, Chief Lere Oyewumi, to violate the peace deal brokered to resolve the crisis between the duo after the party’s primary.

Ogunbiyi, who made the allegation in Osogbo on Tuesday, spoke through his media aide, Mr Ismail Afolabi.

Ogunbiyi should stop accusing Adeleke,he is not in position to giving him ticket stop criticizing him

He said, “To resolve the crisis arising from the PDP primary, the leadership of the party resolved that Ogunbiyi’s camp should produce a candidate who would deputise Adeleke; they conceded Osun West Senatorial ticket of the party to Ogunbiyi himself and also rationalised other issues for peace to reign.

“But the agreement did not see the light of the day. It was breached. Adeleke and his campaign organisation led by Dr Lere Oyewumi picked Hon. Albert Adeogun, an indigene of Ife as the deputy governorship candidate and frustrated the move by the party to substitute Adeogun’s name in line with the said accord. Ogunbiyi and his camp were sidelined thereafter.

“Backed by Adeleke, Lere Oyewumi went all out for the Osun West Senatorial ticket, breached the signed agreement between him and Ogunbiyi while the leadership of the party looked away.”

former governorship aspirant of the Peoples Democratic Party in Osun State, Dr Akin Ogunbiyi, has accused the governorship candidate of the party, Senator Ademola Adeleke, of backing the Director General of the… https://t.co/LWgKEAJ7LR

He added, “Lere contested against himself and yet rolled out results showing that Ogunbiyi participated in the charade he organised in Osogbo, instead of Iwo, the appropriate venue of the exercise.

Osun people at the convention were shocked and emotional to see the so-called result of the unfair and highly incredible exercise. It is evident that Osun PDP is sitting on gun powder. We hope that the national leadership of the party will address Lere’s impunity.”

But Adeleke debunked the allegation.

Speaking through his media aide, Mr Olawale Rasheed, Adeleke said, “We regard the rooster and bull story on the Osun-West senatorial PDP ticket as a mere distraction at a time the PDP and the Adeleke Campaign Organisation are busy preparing for legal presentations to reclaim the stolen mandate of the Osun people.

At a time all genuine PDP members are praying and contributing to make the legal battle a success, here we are with fake news of Senator Ademola Adeleke being responsible for the action and conduct of a senior member of the party.”

Oyewumi, when contacted on the telephone, insisted that he won the election in Osun-West while Fadahunsi won the Osun-East ticket, describing Ogunbiyi as a failure.

Oyewumi said, “I am the PDP candidate for the Osun-West Senatorial District. The primary election was conducted on Saturday. The PDP NWC ordered the conduct of the Osun-West and Osun-East primaries yesterday. The election committee was headed by Ambassador Bala Aboki, the same man that was the secretary of the first committee that conducted the Osun Central primary that produced Gani Olaoluwa.”