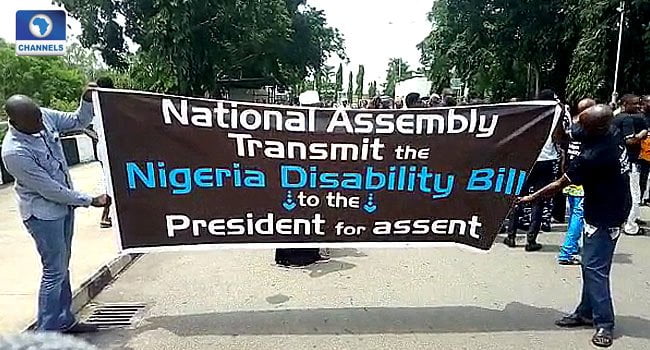 Naija News understands that the protesters were demanding for the transmission of Disability Bill by the lawmakers to President Muhammadu Buhari for assent.

The Disability Bill which has been passed by the two chambers of the National Assembly seeks to protect the rights of Nigerians who are physically challenged.

I support the rights of persons with disability? pic.twitter.com/LPpTZikW2O

The protest by the Persons With Disability comes a day after legislative aides of the National Assembly staged a protest over the non-payment of salaries. The protesters stormed the Assembly Complex on Tuesday morning just before the lawmakers began their closed-door session shortly after resuming from a long break.

The protesters on Tuesday morning stormed the Assembly demanding payment of their Duty Tour Allowance which they say have not being paid sine the past three years.The lawmakers resuming plenary on Tuesday morning after a long break which spanned over two months.