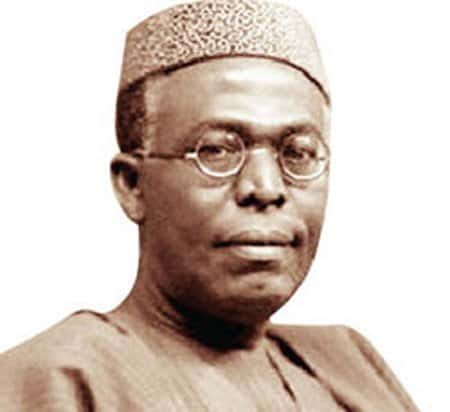 One of the grandchildren of Chief Obafemi Awolowo has revealed what the late sage said about President Muhammadu Buhari years back before he died.

Speaking exclusively to News Express shortly after she stepped down for Gbenga Olawepo Hashiru during the presidential primary of the People’s Trust Party (now renamed Alliance for People’s Trust Party) held on Saturday in Lagos, Olufunke Awolowo said her grandfather during his lifetime, used to say that people came into politics for various reasons and interests but might not have what it takes to be leaders.

What Awolowo Said About Buhari Before He Died — Grand Daughter.

Olufunke Awolowo said her grandfather during his lifetime used to say that people came into politics for various reasons and interests but… https://t.co/8N7DqHJv71

Commenting on the performance of the present government led by President Buhari, the vibrant new-breed politician said:

“It’s is a long time I had been hearing about Buhari, so when he came back in 2014 with the Change mantra, I thought he had changed. That’s why, at a point, I personally campaigned for him because I believed it was time for change.

“Someone even asked me if my late grandfather Chief Awolowo would’ve been happy to see me campaign for Buhari. I told the person that times had changed. But the past three years have shown that the man (Buhari) has not changed one bit; as far as he is concerned, nothing has changed.”

Commenting further she said: “Buhari has failed, and that has taken my mind back to what Papa said about him a long time ago before he died. My grandfather said then that General Buhari did not have a full understanding of politics and governance. With what is happening in the country now, Papa was right.”

“Even President Trump for a while was almost deceived. You could see how angry the American President was with his reaction after that. Nigeria needs someone who is sincere and who means well.”

On why she stepped down for another candidate at the national convention of her party before the actual commencement of the presidential primary election, she said:

“I stepped down because, in the first place, there is always the first among equals. In my party APT, for example, we had more than ten aspirants each of whom could be the president. But sometimes you have to consider certain things, as in readiness, preparedness and all that. I came to realise that I hadn’t made the level of sacrifice that my colleague (Hashiru) had made, so I had to step down for him at the last minute. But I’m willing to work with him. That is what we expected aspirants in the other political parties to have down. It’s not a do-or-die affair. When you claim to work in the interest of the people, then you must consider the people first before self, you must be ready to step down if need be.”

On the forthcoming general elections, Olufunke who is the daughter of Chief Awolowo’s late son Segun, advised the Nigerian electorate on what political party and individual candidates they cast their votes for when the time comes.

“Study their manifestos very closely as well as their total package, not just empty promises as we heard during the build-up to the 2015 general elections,” she admonished.