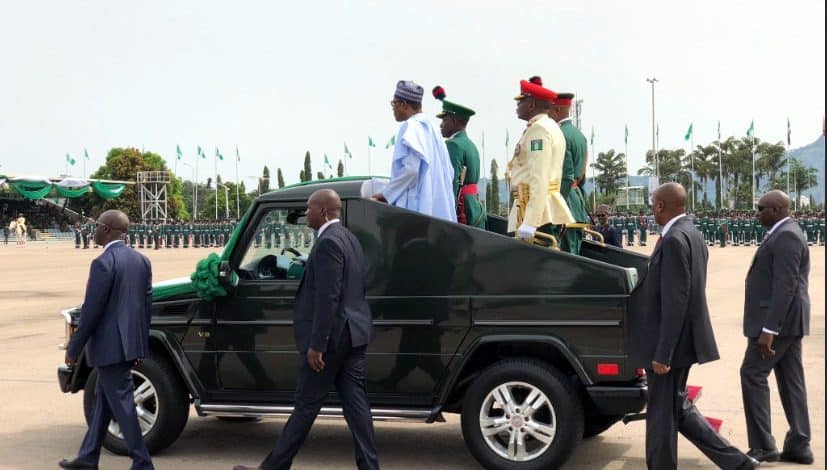 President Muhammadu Buhari today observed the 58th Independence Day parade at the Eagle Square, Abuja. This is the first time a Nigerian president will observe the event at the location after 2010.

When former President Goodluck Jonathan marked the event at the Eagle square in 2010, it was disrupted by bomb blasts. Hence since that year, subsequent independence anniversary parade were held in low key at the forecourt of the Presidential Villa, Abuja.

President Buhari who had earlier made a national broadcast marking the 58th independence anniversary at 7am today broke the jinx and arrived the Eagles Square venue of the parade around 9.30am.

Senate President, Bukola Saraki and the Speaker of the House of Representatives, Yakubu Dogara  who were billed to arrive the venue by 9.10a.m for the event were absent at the Eagle Square.

There was inspection of guards by President Buhari, which was followed by march past in slow and quick time.

There was also march past by para-military organisations, agencies and Nigeria Police Force (NPF) mounted troops.

Also on display were military equipment march past on low loaders.

Police dogs displaying the training they had acquired also thrilled the guests while outriders also displayed their skills.

There was also aerial show by the Nigerian Air Force (NAF).

Naija News recall that while training for the aerial show, there was two jets crash on Friday, which claimed the life of one pilot and leaving two wounded survivors.

Rounding off the ceremony at the Eagles Square, there were firing of volleys and 21 gun salute by the military personnel.

Speaking to journalists at the end of the ceremony, the Minister of Defence, Mansur Dan-Ali, said “You have seen what we displayed today, we are capable of defending this nation.”

The Secretary to the Government of the Federation, Boss Mustapha, noted that the last time independence anniversary was celebrated in full was in 2010.

According to him, a child born seven years would not have idea of how independence anniversary is celebrated in Nigeria.

He said that there is relative calm in the north east while banditry in the North West and north central ae under control as a result of acquisition of more military equipment under the present administration.

He urged Nigerians to be patient and trust the leadership of President Buhari.