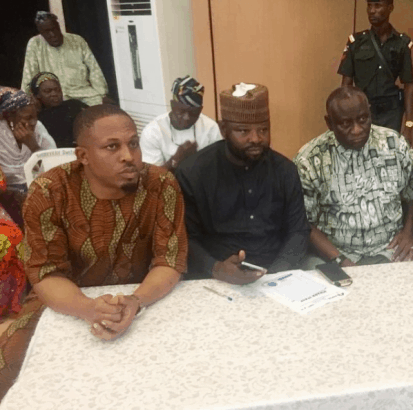 Popular Nigerian rapper, Naeto C, who has been away from the music industry for a while, seems to have found a new hobby after he was spotted as a member of the Peoples Democratic Party committee.

Naeto C was seen in Kwara State, where he is reported to be serving as a member of the state’s PDP election committee for the primary.

The party’s primary took place at Banquet hall, opposite the state’s government house, further report revealed that the rapper is among the election committee nominated by PDP headquarters for the primary. The committee is headed by Charles Menabbo.

However, Naeto C joining politics shouldn’t come as a surprise, as his mother, Kema Chikwe, was a former Nigerian Federal Minister of Aviation, and also held the position of National Women Leader of PDP for many years.

Though few years ago, Naeto C had claimed in the news that he was not interested in politics.

“I don’t think I’ll be doing politics anytime soon, though anything is possible, politics is not my priority for now. It’s all about my music and family for now“.