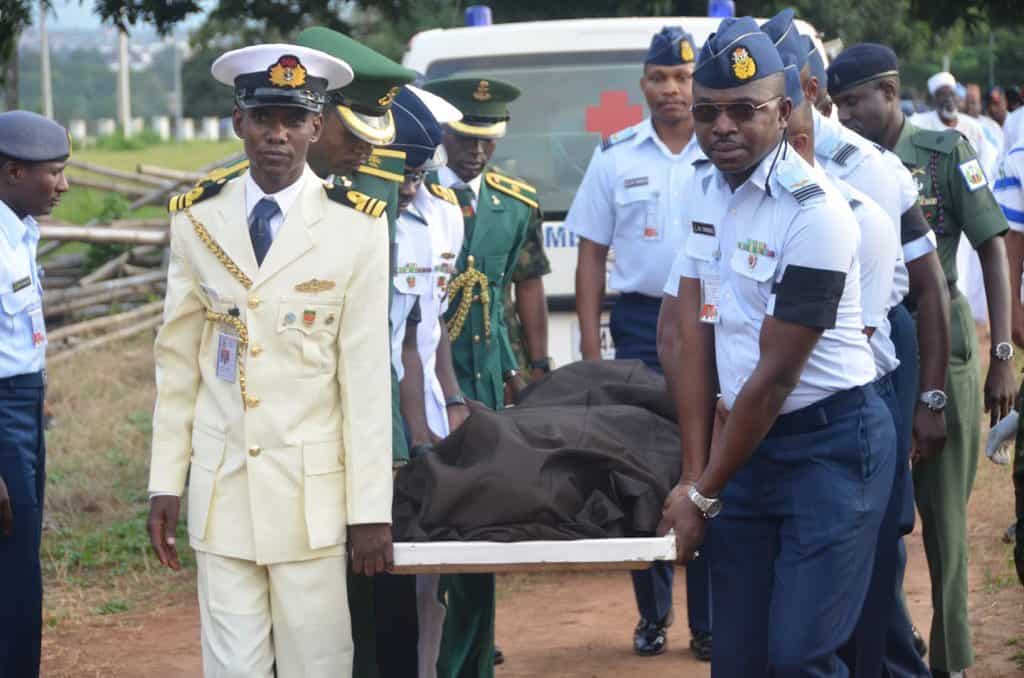 Nigerians have taken to Twitter to mourn the death of Squadron Leader Bello Baba-Ari who died when his F-Ni fighter jet collided with another during the final drill for the air parade that was to be displayed on Monday, October 1, during the celebration of Nigeria’s 58th independence anniversary.

The tributes are coming as PRNigeria gathered that Late Baba-Ari had successfully manipulated his jet away from crashing on a populated area to avoid human casualty before attempting to eject from the aircraft.

A security source disclosed that the aircraft involved in the exercise were rehearsing a routine which included other jets and a larger one in the middle.

The source told PRNigeria that: “Part of the routine was for the set of jets to divide themselves into two group on each side of the larger aircraft and they would bank away in opposite direction. It was in the process that two of the jets on the right brushed each other and began to tumble.

“As well-trained fighter-pilots who have wide experiences in counter-insurgency operations and other air drills, the officers controlled their individual aircraft from crashing on civilian populated areas to avoid human casualty before ejecting successfully… In fact Baba-Ari was the last to eject before the incident occurred.

“Sincerely, we will surely miss Baba-Ari because he was one of the fearless, courageous and humble pilots who like to obey directives on special missions and had taken tough challenges to save our nation.”

Meanwhile, top public officers, family members and other Nigerians have taken to the Twitter to mourn his death and sacrifice in defending the nation as a military officer. Leading in the Tweets is the Presidential Spokesperson Mallam Garba Shehu who paid tributes on behalf of President Muhamadu Buhari on Late Squadron Leader Bello Baba-Ari. READ:

Garba Shehu: “‏The President paid tributes to the gallantry of Squadron Leader MB Baba-Ari, the officer who died in the accident while also wishing the two other wounded officers quick recovery.”

Air Marshal Abubakar: “The officer, Squadron Leader Bello Baba-Ari, has been buried in accordance with Islamic rites. We pray the Almighty grants his soul eternal rest.”

Safiya Baba-Ari: “He would always say “see you on the other side” when he was leaving. I still feel like he’ll walk into my room in his flying suit. He was the kindest and most selfless person. Ya GhafuruRaheem, Ya Afuw, forgive my brother Bello and grant him Jannah. You’ll always be in my heart?”

Maina 88: “You finally left us.. You left the pain and tears in our eyes. May your soul Rest In Peace. Squadron Leader Bello Mohamed Baba-Ari.”

Muhd Ibrahim Abba: “‏Rest in peace Squadron Leader Mohammed Bello Baba-Ari— the Nigeria Airforce @NigAirForce pilot who died today after ejecting from an F-7Ni aircraft. Posterity will remember you in the good side of history.”

Farouk Suleiman: “‏May Jannat firdaus be the final abode of the fallen Airforce officer Baba-Ari. Thank you for your service”

Nnamdi Anekwe-Chive: “I like Muslim burial rites. Bury the dead immediately and move on. R.I.P SL Mohammed Bello Baba-Ari. His family must not be forgotten.”

EMEKA EKWE: “Is unfortunate the real heroes who dedicate their lives to national calling are not celebrated in my country. Rest in perfect peace Sqr Bello Baba-Ari.
Wish other injured officers quick recovery”

olusanjo fawole: “Rest In Peace squadron leader Ahmed Baba-Ari. You paid the supreme sacrifice whilst serving the nation and your fatherland.”

Odeyele Ayodeji: “I hope everyone takes a moment today to pay last respect to a true hero,Squadron Leader Mohammed Bello Baba-Ari I who died during an air incident involving 2 Nigerian Air Force aircraft taking part in the rehearsals for the 58th Independence Day Celebrations.”

Usman Maigana: “A HERO of the war on terror died …In an air incident. Rest in Peace, and thanks immensely for your service to Nigeria…Late Squadron Leader Bello Baba-Ari”

Suraj ayodeji shittu: “NIGERIA IS GRATEFUL TO THIS BEAUTIFUL SOUL. MAY ALLAH FORGIVE HIM AND GRANTS HIM THE HIGHEST PARADISE. 180MILLION NIGERIANS ARE SAYING THANK YOU TO BELLO.”

Asma’u Ribadu: “Allah ya jikan shi da Rahma. May Allah (swa) give you and your family the fortitude to bare this loss. May Aljannatul firdaus be his final abode.”

Joseph AMASIKE: “Nigerians across the length and breadth of our nation, across tribes, across religion, salute this officer, we mourn his departure but we thank God for his life. May God grant him eternal rest and strengthen and uphold his family.”

Mister Phatkat: “I thank you are your family for his service. I wish him strength in his journey upwards back to the Luminous Heights.”

DjDouble_Dee: “My condolences to you and your family. I pray God almighty will console u for your loss. And that God almighty bless you mightily and also be with you and ur family, so that the vacuum of a father, won’t be felt.”

Idris Aluko jafar_oriade: “Gone too soon brother, but Allah know best. Alijanat fridaouse is all we wish for… Aameen!”

Gimba Mamu: “Please accept my condolence may Allah forgive him and grand him Jannatul firdaussi. It’s irreplaceable lost to the country, the family, Yobe and the bolewa clan.”