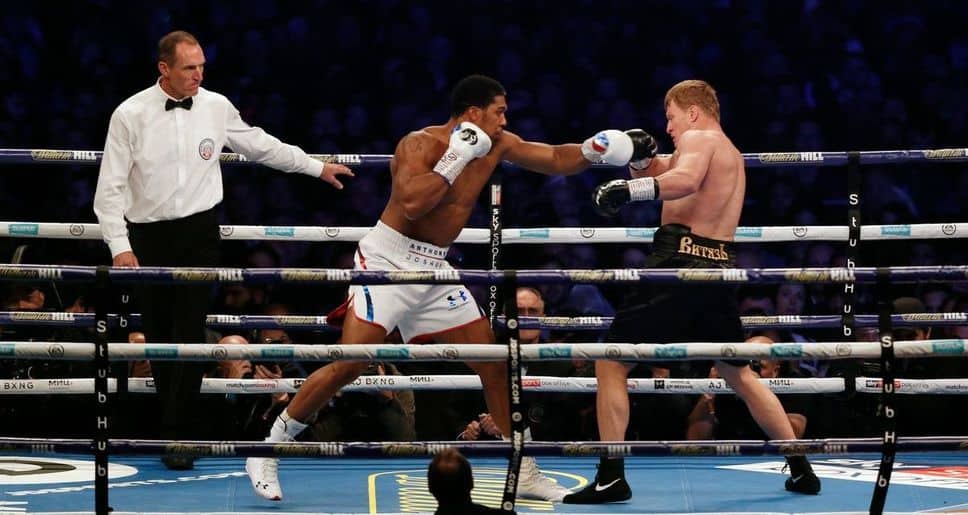 World heavyweight champion Anthony Joshua selected his belts IBF, WBA and WBO by beating Russia’s Alexander Povetkin by a stoppage of the referee on Saturday at Wembley, before perhaps the expected shock against Deontay Wilder in April.

By beating his official challenger, the Briton has opened the way for a mega-fight against Wilder, WBC title holder since January 2015. But before that, the American will have to get rid in December of the British Tyson Fury, who returns from A desert crossing after being stripped of his titles WBA, IBF and WBO, won in November 2015 against Wladimir Klitschko.

In the meantime, Joshua did his part of the job by defeating Povetkin, WBA champion from 2011 to 2013, and further improving his superb record with a 22nd win in 22 fights.

The darling of the public made a sensational entrance into the enclosure, dedicated to his cause. Flames, fireworks, music, platform to lift him above the crowd, the Olympic champion of the London Olympics was welcomed as a true rock star by a full and delirious Wembley.

Did this pressure disrupt him at the beginning of the fight? “AJ” has in any case suffered in the first rounds. He explained before the fight that the Olympic champion of the Athens Olympics had the “best left hook of the world”. He was able to see it in real life in the first round.

From the start, Povetkin managed a devastating sequence, with two strokes that carried and a left hook that hit the British hard on the nose.

The Russian continued his dominance in the second and third rounds, taking advantage of his speed to return some violent blows in the custody of Joshua, much larger (2.08 m against 1.90 m).

But at the turn of the fourth round, “AJ” began to read the Russian better, showing all his maturity so as not to panic. After returning to the fight in the next two rounds, he unleashed all his power on Povetkin, who had lost only once in his career, in points against the immense Wladimir Klitschko.

If Joshua fearing the left of the Russian, it is yet he who put his opponent down with this shot. By sending a huge hook, then combining with another big right hook, he sent Povetkin to the mat.

The Russian came back, but sounded, he received a new volley before the referee stopped the fight a few seconds later, under a standing ovation from Wembley, delighted by his darling’s victory.