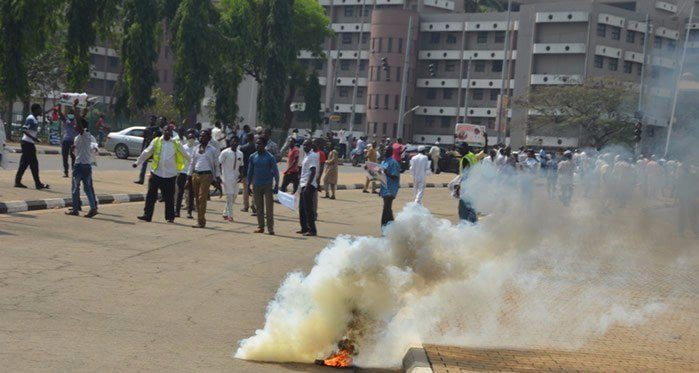 How Police/Shiite Clash Occurred In Yobe

An unidentified boy has been killed by a stray bullet following a clash between members of the Islamic Movement of Nigeria (IMN) and security personnel in the commercial city of Potiskum, Yobe State.

Three members of the IMN  also identified as Shiites have also been reportedly injured during the clash which took place around 8.30am today.

Confirming the incident, Yobe State Commissioner of Police (CP) Mr. Sumonu Abdulmalik said, “the problem started when El-Zazzaky people during their yearly Ashura procession attempted to seize a gun from a soldier. Three people were wounded from the fracas. This I can confirm to you but I am still expecting details later in the day”.

However a member of the group identified as Ibraheem El Tafseer denied the CP’s claim, saying that, “that is not our habit, that is not in our character. What the CP told you is not true”.

“We have spent more than 25 years doing our Ashura procession in Potiskum. But today we came on the street and we were going then soldier came and started beating our members and later opened fire on them. Three people were injured. One person was hit by a stray bullet. Unfortunately he died. But he is not our member. They arrested one of us and took him away.

“The claim of the police is not true. We have even finished the procession and we gathered to round up when they now came. Nobody tried to attack them. That is not our habit. That is not in our character,” Ibraheem narrated.

Another source said that the members of the IMN threw stones at the JTF Vehicle which provoked the security personnel.

Meanwhile, the sound of gunshots threw the commercial city into confusion.

But the commissioner of police has assured that normalcy has returned to the city.