2019: Tambuwal Speaks On Why He Left Second Term Governorship Bid To Focus On Presidency | Naija News 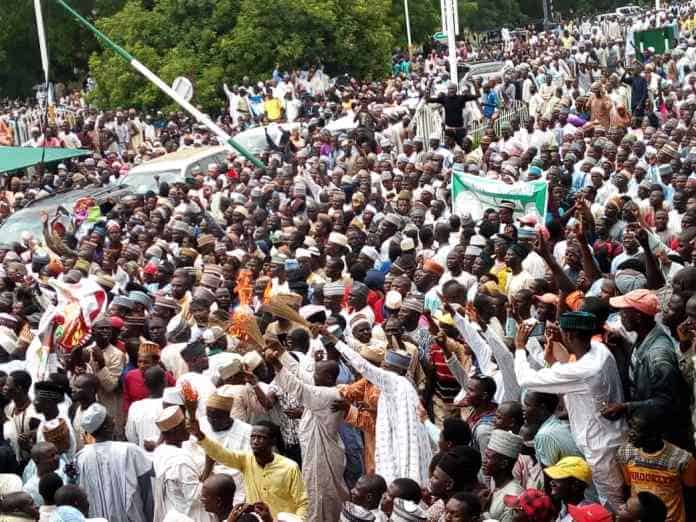 A leading presidential aspirant under the platform of the Peoples Democratic Party (PDP), Aminu Waziri Tambuwal has stormed the south-west geo-political zone with his campaign, promising to provide purposeful and visionary leadership that will unite the country

The governor of Sokoto state, while addressing the PDP supporters and delegates at the Osun state party secretariat yesterday evening, said there is the urgent need to provide a credible alternative that will oust the All Progressives Congress (APC) led government of Muhammadu Buhari which has failed in all ramifications.

“This country is at a cross road. We need leaders that can bring people together and reunite us, bring the country together and secure it.”

Tambuwal, who is also the immediate past speaker of the House of Representatives said: ” We need to also provide jobs for our teeming youths and women; there is a lot of poverty all over the land.
We know how PDP left the economy of this country and we know what is happening today. Don’t mind what they are telling you is just simple lie. The economy is not doing well. The fight against corruption is selective and indeed there are no jobs for our people. So have they not failed on their promises to our people?”

“I assure you that this ticket by all standards and by all measures is not going to be compared to that of Muhammadu Buhari. We have understanding of the dynamics of the Nigerian state, there is no part of this country that I have been to. We shall promote national unity and harmony”

He told the delegates that “I have a very good understanding of what it takes to provide leadership in Nigeria. I have the energy, the capacity in terms of experience I have been a member of the National Assembly for 12 years four of which I was the speaker, and I am now governor of Sokoto state I have garnered enough executive experience to pilot the affairs of this country. Not only that I have been very close to Nigerian judiciary I have been a lawyer who has practiced in many courts in this country so I have understanding of the workings of both the executive, legislature and the judiciary.”

In Ibadan, Oyo state, governor Tambuwal told PDP delegates and journalists that he took the decision to forfeit his second term as a governor under the APC because of his commitment to the unity and development of Nigeria.

“Yes, I am serving my first term as a governor of Sokoto state with the probability of winning a second term by 60-70 percent but because of my patriotism and commitment to the development of this country, I decided to not only volunteer but also heed to the calls of Nigerians not just to run for the presidency but also leave the APC which had majority in the north west and that is not a small decision that I decided to take because of my commitment to the unity of this country because things are not going well in Nigeria and we are all aware of it and we need to do something. It is for us to rally round and effect a change of government at the centre and that is my motivation.”

He acknowledged that Nigerian security services cannot protect the country because they under staffed and ill-equipped.

He promised to embark upon massive recruitment of capable hands in all the security services and overhauling and total reform of the military and the Nigeria police.