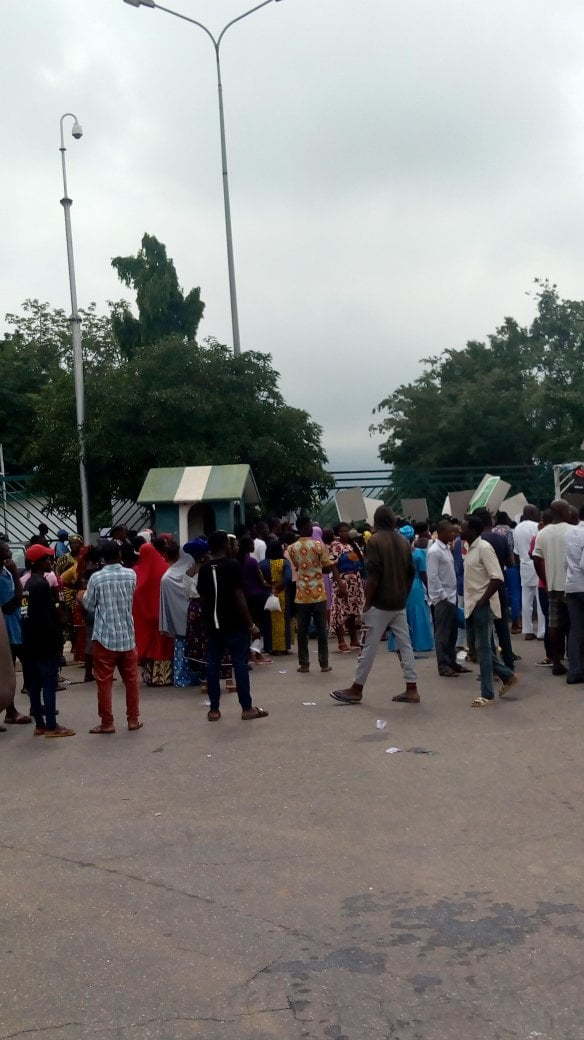 Armed with placards with different inscription and with threats that they will boycott the 2019 general elections, Hundreds of pensioners in Kwara State on Tuesday embarked on a peaceful protest in Ilorin against the non payment of over N50 billion pensions and gratuities by the state government.

The pensioners, who including those from the 16 local government areas of the state and primary school teachers, gathered in front of the State Secretariat of the Nigeria Union of Pensioners (NUP), located in the Commissioners’ Lodge Way, Government Reserved Area (GRA) in Ilorin.

The Pensioner who were chanting various anti-government songs, defied the heavy rain to express their discontent about the non-payment of their gratuities by the state government.

The retirees, mostly old women and the physically challenged people, also displayed their permanent voter cards during the protest, vowing not to participate in the elections, unless the state government met their demands.

The state chairman of NUP, Alhaji Saidu Oladimeji, said that the state government had since March 2014 stopped the payment of gratuities to retired workers, which he said, had increased the poverty level and led to untimely death of many pensioners.

He added that retirees from the local government areas had not been collecting gratuities since 2008, saying, “they had been taken amputated pensions since 2008”.

NAN reports that the chairman also accused the state government of non-implementating the 20 per cent of the salary increase harmonisation to workers that retired ahead of May 1, 2010 in the16 council areas and teachers under the State Universal Basic Education Board (SUBEB).

“We are demanding the full payment of the mutilated monthly pensions to retirees from the local government areas which had entered 10 months now with negative impacts on the lives of the retired workers,’’ he said.

In his reactions, Dr Muideen Akorede, the Senior Special Assistant to the Governor on Media and Communications, said the state government was aware of the pensioners’ plights.

According to him, the state government will assist the local governments to clear all the arrears as soon as it receives the expected cash inflows.