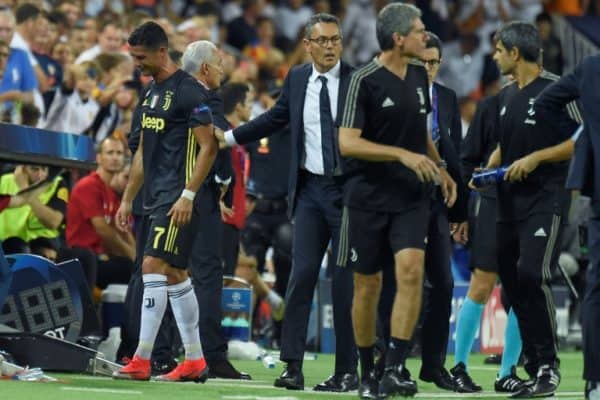 Cristiano Ronaldo had a disappointing UEFA Champion’s League debut for his side Juventus as he was sent off against Valencia on Wednesday.

German referee Felix Brych showed the Portuguese striker a red card in the 28th minute of the game at Estadio Mestalla.

Ronaldo’s booking was as a result of an altercation with Valencia defender Jeison Murillo.

In what seems to be an harsh booking, the central back for Valencia, Murillo had tracked Ronaldo in Vanlencia’s box, the later lost his cool and kicked the defender as they tussle for space.

Murillo instantly fell to the ground and, after consulting his assistant on the goalline, Brych sent Ronaldo off.

The striker dropped to the floor in disbelief and had tears in his eyes when he finally walked down the tunnel.

Ronaldo will now miss Juventus’ next game in Group H, which is at home to Young Boys on October 2.

The red card received by Ronaldo today was his 11th in his stellar career.

In Valencia, Juventus, despite losing striker Cristiano Ronaldo to a red card, prevailed 2-0, with the goals by Miralem Pjanic, coming off penalties awarded either side of the two halves.