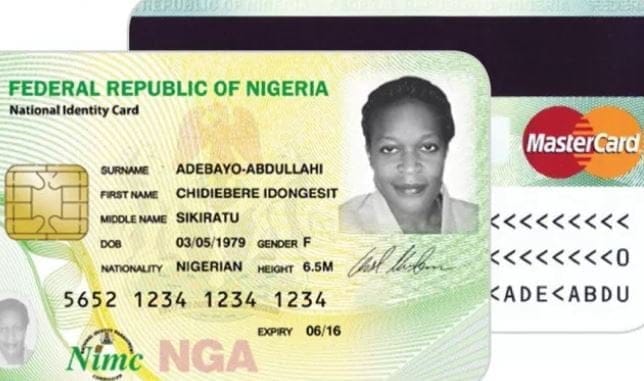 The Federal Government has promised to enforce the use of the National Identification Number (NIN) beginning from January 1, 2019.

The Federal Government says it is enforcing the mandatory use of the National Identification Number (NIN) beginning from January 1, 2019.
The Director-General of the National Identity Management Commission (NIMC), Engr. Aliyu Abubakar Aziz, disclosed this on Tuesday 18, september pic.twitter.com/AbeQrJqJ2S

Naija News understands that the Director-General of the National Identity Management Commission (NIMC), Engr. Aliyu Abubakar Aziz, disclosed this in a statement yesterday.

He said the mandatory usage of the identification number was sequel to Federal Executive Council (FEC’s) approval last week of the immediate commencement of the implementation of a strategic roadmap for a new Digital Identity Ecosystem.

FEC, at its meeting chaired by President Muhammadu Buhari last week approved the new identity ecosystem strategy for the enrolment of Nigerians and legal residents into the National Identity Database (NIDB), the statement said.

‘’The FEC’s approval of the new Digital Identity Ecosystem will bring into full force the implementation of the provisions of the NIMC Act 23, 2007, which include the enforcement of the mandatory use of the National Identification Number (NIN) and the application of appropriate sanctions and penalties on defaulters as provided under Section 28 of the NIMC Act’’, the statement added.

Speaking on the strategic roadmap for a new Digital Identity Ecosystem for Nigeria, Engr. Aziz explained that the step falls in line with the Federal Government’s efforts to re-position the country as a leader in the global economy.

Mandatory Use Of Identity Numbers Begins In January 2019 https://t.co/nVRG6eCnE5 pic.twitter.com/89mAmIhBZW

Speaking further, he said Section 27 of the NIMC Act empowers the Commission to set a date for the enforcement of the use of the NIN for transactions listed in the Act and also to expand applicable transaction in a Regulation approved by the Attorney General of the Federation.

Engr. Aziz said “the Commission shall from 1st January 2019 commence full enforcement of the mandatory use of the NIN and apply all applicable sanctions and penalties as provided under Section 28 of the NIMC Act against defaulters.”

He also said the cut-off date for data eligible for harmonization with the National Identity Database (NIDB) is 1st of December 2018.

“This means only data captured as at 30th November 2018 will be subjected to harmonisation as is currently on-going.

“Fresh data capture of persons shall be in compliance with the Provisions set out in the Nigeria Biometric Standards; Mandatory use of the NIN Regulations 2017 and guidelines issued by the Commission.

“That is to say the capturing agency must request and verify the NIN before taking secondary demographic data of the person and where the person does not have a NIN, register such person (where it is licensed to do so) or refer such person to a NIN registration centre.”

“Only licensed public or private agencies shall capture and transmit biometric to the NIDB.“Only the NIMC, Nigeria Police Force and other related security agencies shall store biometric data’’, the statement said.