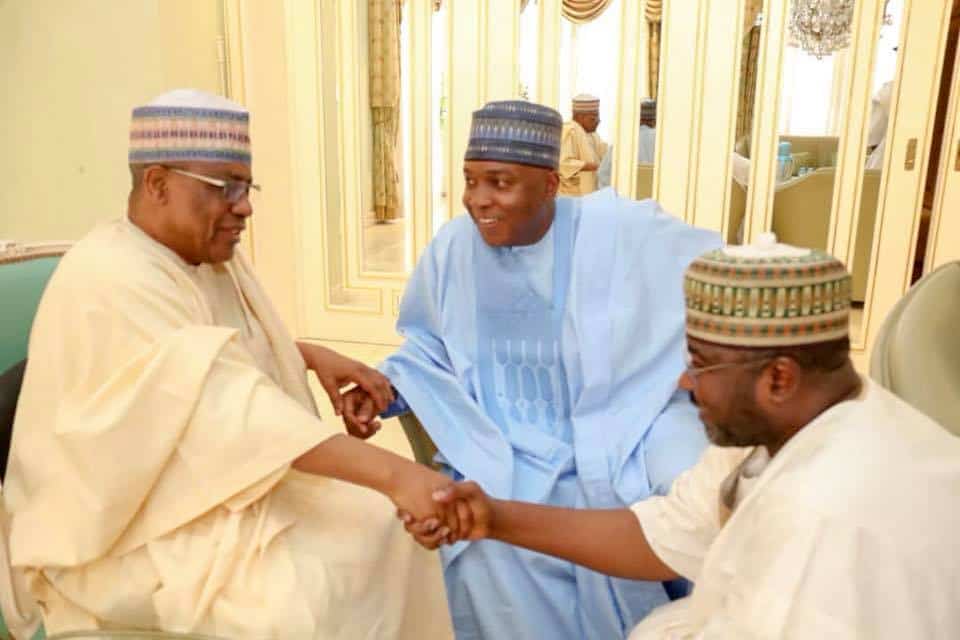 Former military president of Nigeria, Ibrahim Babangida, has thrown his weight behind the 2019 presidential ambition of Dr. Bukola Saraki.

Speaking during Saraki’s visit to his hill top mansion in Minna, Niger state, Babangida said his decision to support the Senate President’s ambition was because his (Saraki’s) late father, Chief Olusola Saraki, was supportive of him and his administration.

“It is my turn to do what your father did to me,” he said, adding that he would treat the PDP presidential hopeful as his son.

“I will rightly observe that you are my son, for coming to pay a courtesy visit.

“I remember when I was still in office, I spoke with your father, Oloye Saraki, who was always providing advises on a number of things about this country.

“He always made himself available to me, to give advises and encouragement, which will move the country forward. Your visit today is historical, now it is your time and turn to come to me and I will do just that.”

“You mentioned three things that are very dear to us as military, and we fought to get them, to preserve them. They are unity of the country, the security of lives and property, and economic development.

“The security of the people and the well being of the ordinary man are the right objectives for campaign and leadership for this country.”

“You have been able to hold the Senate together for these years. I commend you, you have my support for these three reasons you have itemised and I hope the people will listen to you.”

Saraki, speaking on his plans for Nigeria, said he plans to strengthen the rule of law and democratic process in the country, adding, that Nigeria needs a youthful president that can unite the whole country.

“I am happy that even they that started making the noise have now agreed that they will follow the rule of law and due process.

“What is important to me is to ensure the autonomy of the three arms of government, to allow rule of law, to ensure that we respect the democratic process.”

Commenting on the political situation in Kwara State, Saraki described opposition politicians as visiting politicians, who only come around once in four years.

He said, “The interesting thing about Kwara politics is that majority of the politicians are transit politicians who come to seek the people’s votes when it is six months to every election.