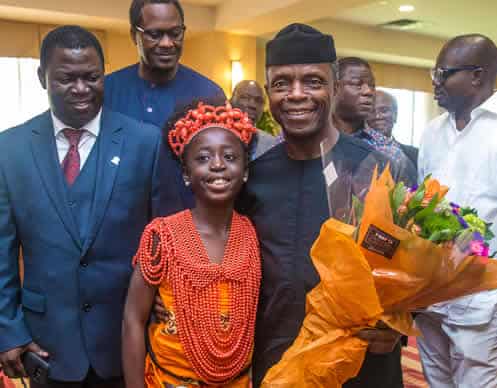 The Vice President, Yemi Osinbajo,  today expressed support for the request by young aspirants under the platform of All Progressives Congress (APC) to be given quotas in elective offices.

VP Osinbajo received tonight, at the Presidential Villa, a number of APC young aspirants from across the country. The future is here, he told them during an interactive session with the up and coming politicians pic.twitter.com/2XSFFjHosz

Naija news Understands that Mr Osinbajo’s stance was communicated in a statement by Laolu Akande, Senior Special Assistant to the President on Media and Publicity.

it will be recalled that yesterday’s night , the vice president met with young aspirants under the platform of APC at the Presidential Villa, Abuja where he commended Nigeria’s youth for their desire to contribute to nation building in their various constituencies through active involvement in politics.

He called on them to make needed sacrifices to ensure the ideals they want to see in the country were realised.

“We are in a place where we are the ones who can make the difference; nothing is going to change overnight, but we can make efforts to change the process.

“We can do a lot more, but it depends on our commitment. I like the idea of young people getting a quota in the party structure to run for office on some level, such as the state houses of Assembly.“Some of the aspirants had earlier raised the issue of allowing quotas to young people in elective offices.“It is up to us to fight at every stage to see the ideals that we desire; we will win, in the end, if we are consistent.“Our party is stronger if our young people are determined to make a change and a difference, even from within.

“We would see what can be done to ensure that women and youths are more involved in party politics.”

Mr Osinbajo noted that the country’s future depended on the commitment of young people who were willing to play their part and make positive differences.He said that it was important to encourage young people to participate at all levels of the party.

The vice president said the courage of the young aspirants was exceptional for aspiring to run for offices in a country of about 200 million people.

“Having gone this far in the game; that you are not just sitting down at home, not just getting upset with yourself on Social Media.“You are putting your money, resources and your time where your mouth is.“So, consider yourself in very exceptional company. This is a group of people who have not lost hope, but are very determined to ensure that things work.”

Mr Osinbajo added that young people should not lose hope in the country as things would continue to change for the better if they remained committed to the ideals.

He said he strongly believed that the future of the party depended on people who were committed to building a party that was based on ideals that were deemed important.

“As a young person, I belonged to several pressure groups. I graduated at the age of 21.“And when I graduated, I began to participate in various pressure groups, human rights organisations, anti-corruption, civil society groups of every kind.

“When political parties started forming, we could not aspire, but we remained involved. My first involvement in government was when I was appointed as Attorney General in Lagos State.

“For seven years – after serving as Lagos Attorney-General – I was part of the party, I did not have a board appointment or anything, but I kept working for the party.

“I kept working for the party as a lawyer. Most of those cases, we were not paid a dime. But we went from place to place.

“Sometimes we didn’t even have a place to stay when we went to court the next morning. So, there is a measure of paying the price, it depends on how serious or committed we are to some of the things we say we are committed to,” he said.

Mr Osinbajo further called on young people to stay committed and remain within the party to help to build the party structures.

He said that he believed that, in party politics, faithful must go beyond positions, whether elective or appointed, but must be committed to something, the principles and beliefs of those who were the forebears of that party.

Young aspirants in APC across the country who attended the meeting on Wednesday night had requested for audience with the Vice President ahead of the forthcoming party primaries.