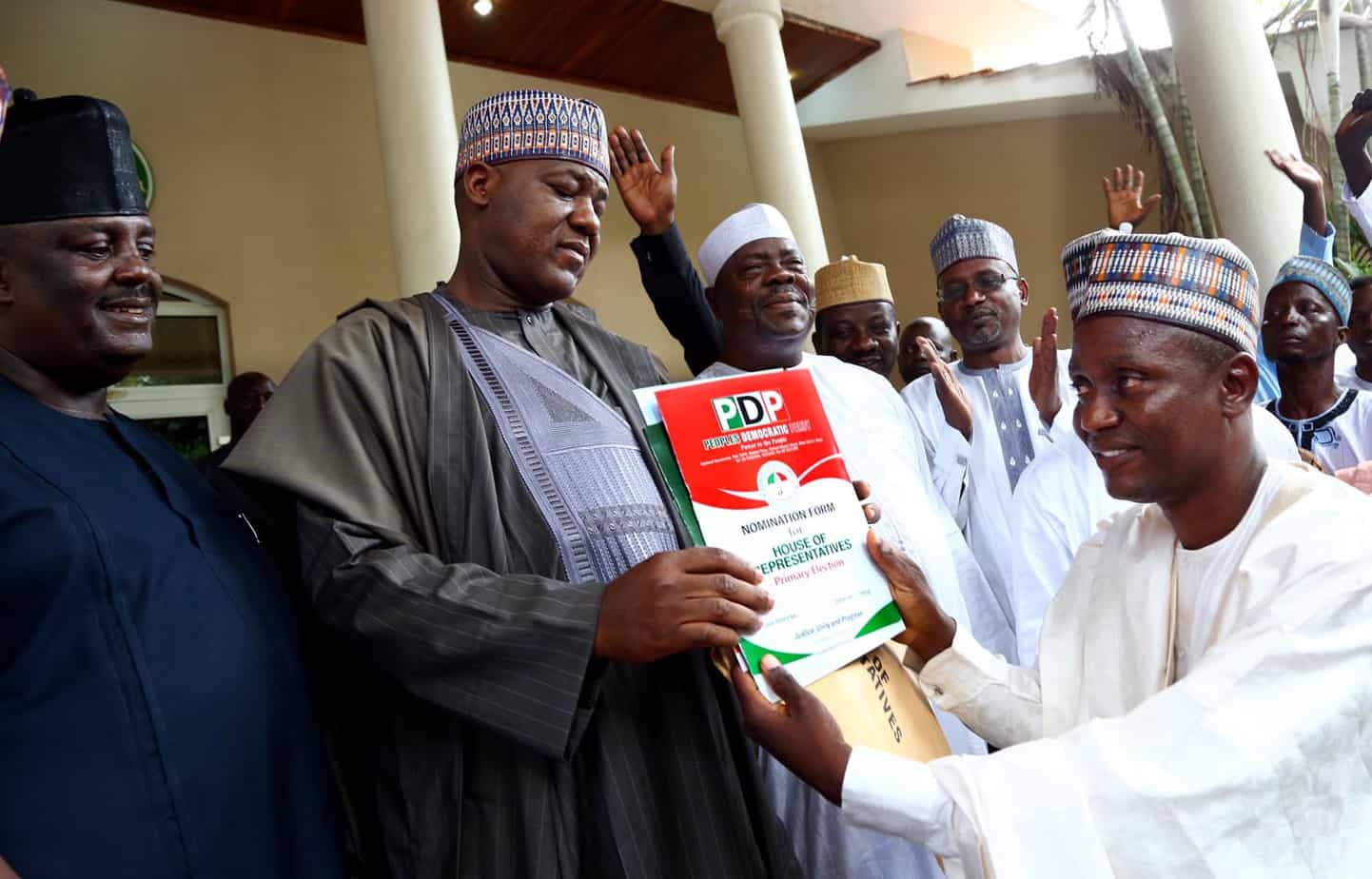 The Speaker of the House of Representatives, Hon Yakubu Dogara, have received hundreds of his supports from Bogoro/Dass/Tafawa Balewa Federal constituency of Bauchi State in his Abuja residence, who presented him with Peoples Democratic Party (PDP) nomination and expression of interest forms, while also appealing to him to dump the All Progressive Congress (APC).

While Promising to support the Speaker regardless of the party he choice to join, Hon. Mohammed Aminu Tukur, Alhaji Adamu Jambil and Mrs. Amina Saleh, the leaders of the delegation, cited the alleged injustice meted out on the speaker in the ruling party, APC as the reason why they are appealing for him to leave the party.

Hon Aminu Tukur, while speaking on behalf of the group accused the APC of having dictatorial tendencies and displaying injustice, saying that this new trait is contrary to the promise by President Muhammadu Buhari that the party will be free for all.

“The day Buhari joined partisan politics in 2002, I was the only person from Bauchi that travelled and I have been with him since then. Mr Speaker, I swear to almighty God that He spared my life. I and our people will vote for you and we urge you to heed to our cries and accept this form. We pray that God returns you to your seat. APC is not a religion as it is neither Islam nor Christianity,” Aminu Tukur said.

On her part, Mrs. Amina Saleh, from Dass local government, said women in the constituency have sent her to inform the Speaker that they will be with him: come rain, come shine.

She said, “You told us to join APC and we did. We worked for the party but they have betrayed us and that is why we said instead of building another house, it is better we return to our former home where we are more welcome. They are already celebrating that we are here to present these forms to you. Please our leader, we appeal to you to accept it and wipe away our tears.”

It can be recalled that the APC in Bauchi State has been engulfed in a crisis arising from failed party congresses which has led to thousands of defections and resignations of many of its chieftains and supporters.

Responding, the Speaker told the mammoth crowd that, “I have listened to you and I want to say that I am not a novice in politics. So even if they do not regard us, they should know that we are in full control of our five senses. We know what looks like justice and what is not justice, we also know if you want to humiliate or honour us.

“We built the APC in Bauchi and with time left the PDP and entered the APC. I was the first and only lawmaker from Bauchi State that left the APC then and we knew why we left. We also know what we promised the people of Bauchi State then.

“But I must thank you all. This is not the first time we would face these of kind of threats and betrayal. Our only fault is that we have chosen not to side with injustice or wrong. We always voice out when we see that we are beginning to derail from our election promises to the people and that is why some people said they will retire us from politics and have even started celebrating that they have buried us politically. But throughout all this, I remained unperturbed because I knew that we had our people with us.”

Dogara who further decried injustice in the APC, added that that the new leadership of the party failed to live up to its assurance that all states that had issues with their congresses would be allowed to hold direct primaries, thereby depriving them of any hope that their supporters would have the opportunity to vote for their choice.

Hon Dogara, further said, “Truly, I have decided that I will not seek election again. They said they will give me ticket in APC but that I must go and beg for it. I said I do not need the ticket. In politics, I have never gone to anybody’s house to beg for ticket. My ticket is my people. I have assured them that even if I run under zero party, my people will vote for me. So long as it is Bogoro/Dass/Tafawa Balewa, even if we run under zero party; we will win by God’s grace. We have thrived well in many political battles in the past and this one too, we shall overcome it. Nobody can threaten us or tell us that we cannot contest election in a political party we spent our resources to establish, only God can stop us.

“I had heard your voices and the voice of the people is the voice of God.
We are in politics to serve and not to be served. As I said, if it were for myself, I will quit because truly I am tired and even thought of stepping aside. But we must run election so long as our people say so.

“I have seen the forms you brought. I don’t know how you got it but I must thank you for this sacrifice. Left for me; I will appeal that you give me sometime to go and consult further.

“I have a lot of supporters in the APC but I have not told any of them what I intend to do or where I will go because I was not given the opportunity but I will assure you that wherever you want me to go or whatever you want me to do I will obey you because you have been with me. This is leadership.

“Even when they were talking about reconciliation in APC, we told them that even if I will be given free ticket in APC, so long as they do not do justice to Senator Sulieman Nazif, Senator Isa Hamma Misau, Honourable Ahmed Yerima, Hon. Aminu Tukur, Hon. Maryam Bagel and others, I will not accept it. I even said that if they will do justice to these people I will be satisfied”