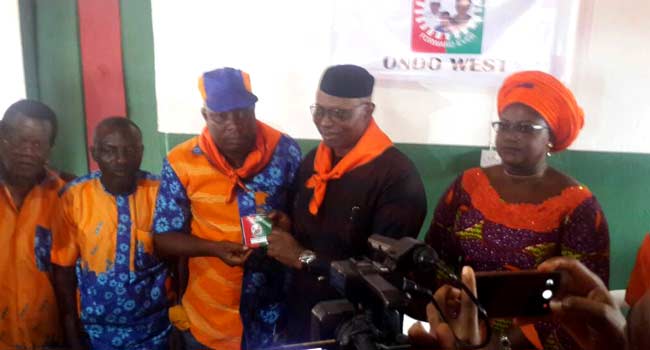 The Nigeria Labour Congress  Says It has rejected the plan by former National chairman of the Labour Party, Abdulkadir Abdulsalam to adopt Olusegun Mimiko as the party’s Presidential torchbearer for the 2019 general elections.

This is not the time to cheapen the dialogue by engaging in argument on whose turn to run the country. Rather, it is time to insist that only the best is good for Nigeria #BecauseWeCare #Iroko2019 pic.twitter.com/hBFxdCjkZB

Naija News learnt that Mr Ayuba Wabba, NLC President and Mrs Ebere Ifendu, the National Publicity Secretary, Labour Party, stated this at a joint news conference on Thursday in Abuja. According to Wabba, it is very important for labour to make its position clear for the 2019 General Elections.

“It is not possible for Mimiko to run under the labour party and we want to say no to that. Mimiko has no business as a member of the Labour Party.

“The party is registered by the NLC and the Trade Union Congress, Market Women Association, students, we register the party and the certificate of the party is with the NLC General Secretary.“Therefore, bringing money to buy the party or the structure will not work, we do not share in the same ideology with him. This is a party with a difference.“Therefore, I want to call on Minimko once again to make sure he hands-off the party.

“Therefore, A.A Salam cannot continue to function as the chairperson of the party,” he said.He added that the Labour Party is not a place for any candidate to join when the condition is favourable.

Why former Ondo State Governor DR OLUSEGUN MIMIKO wants to be the next President of the Federal Republic of Nigeria… pic.twitter.com/cQVrjkHEOe

“It has become necessary for the leadership of the Labour Party to draw the attention of the general public to the fraudulent collection of expression of interest and nomination form fees from innocent and unsuspecting political aspirants.

“That is for those who desire to contest various elective positions under the Labour Party through Alhaji A. A. Salam, the former national chairman of the party.“It would be recalled that A. A. Salam was removed at the special national convention of the party held on 3rd October, 2017.

“This illegality was also confirmed by the Independent National Electoral Commission report, presented by the three INEC officials that were detailed to supervise its conduct, ‘’ she said.

She also disclosed that the party’s counsel, Femi Falana has served INEC, A. A. Salam and Julius Abure, the Court contempt summon, hence warned them not to proceed with the illegal party convention otherwise they risk arrest.

“Credible information reaching us revealed that A. A. Salam has concluded arrangements to pull a rented crowd to declare Olusegun Mimiko as the Labour Party’s Presidential Candidate.

“This illegal event is scheduled to hold in Abuja on Thursday, 13th September. This is a total violation of Article 27, section 1, subsection i and ii of the Labour Party’s constitution.

Ifendu said the party constitution stipulates that ‘aspirants for presidential election shall be nominated as a candidate for the party at the national convention.

“Where the National Executive Council identifies a credible and nationally acceptable person, it shall nominate and present such a person for ratification only at the national convention as the party’s presidential candidate.

She called for caution in the light of the above violations and open disregard to the constitution of the party.

She called on all Labour Party National Working Committee members, State officials in the 36 state, FCT, among others to disregard the illegal gathering being summoned by A. A. Salam and Julius Abure.

“The law enforcement agencies have been adequately notified of this illegal gathering and they are poised to take legal action against any person or group of persons that attend this illegal gathering. To be fore-warned is to be fore-armed. “That all intending aspirants and candidates, willing to contest elections under Labour Party, should desist from dealing with A. A. Salam and Julius Abure on election matters. Those who make payments to them do so at their own risk.

“Consequently, the party hereby disowns and rejects Olusegun Mimiko as its presidential candidate, since neither the national executive council nor the national convention has been notified, as provided in the party’s constitution referred to above.“Be informed also that a court contempt proceeding has been served on A. A. Salam and his gang leaders.

“Any attempt by them to convene an illegal NEC convention or any gathering of such similitude will amount to a court contempt and a total disregard for the rule of law,” Ifendu said.