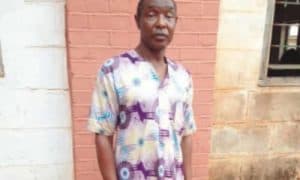 How Headmaster Defiled Four Of His Pupils In A Bush At Enugu.

50-year-old school headmaster who allegedly defiled four of his school pupils has been arrested by the Enugu Police operatives.

The suspect, Idoko Nathaniel, who belongs to the Mkpamteulo, Enugu Ezike in Igboeze North Local Government Area of the state, was said to be in-charge of migrant farmers’ children school located at Aguibeji, Enugu Ezike.

In a statement, on Tuesday, Police Public Relations Officer (PPRO) in the state, Ebere Amaraizu, said that the suspect had in the afternoon of July 17, 2018, in a nearby bush at the migrant school, raped and defiled four of his school children within the ages of five and six years.

Amaraizu said that Idoko has confessed to the crime and was begging for forgiveness, while blaming the incident to satanic act.

Amaraizu added that the suspect used his fingers to defile the four female pupils which had inflicted serious injuries on them; making them to walk abnormally.

The command spokesman further said that the incident was discovered when one of the victims opened up to her parents.

He also said the suspect was already helping operatives of the Gender Unit of the State Criminal Intelligence and Investigations Department in their investigation and would soon be arraigned in court.