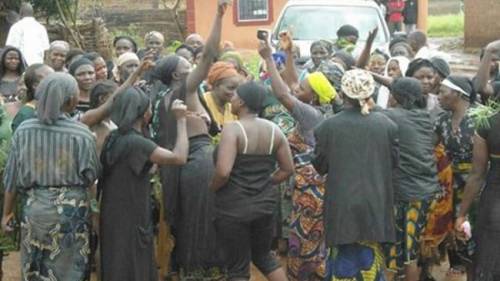 A group in Rivers State, the Concerned Community Women of Rivers (COCOWOR), has threatened to protest naked, if the supply base of Shell Nigeria Exploration and Production Company (SNEPCO) refused to rescind its decision to relocate the supply base from Rivers State to Lagos.

The development is coming after a peaceful protest led by Philip John Tenwa, President of Onne Youths Council (OYC), in Port Harcourt, the capital of Rivers State.

According to Henrietta Edumoh, leader of COCOWOR, the protest became necessary to save the jobs of their husbands and children.

Tenwa had claimed that relocation of SNEPCO supply base to Lagos state would lead to the loss of more than 5,000 direct and indirect jobs.

Speaking on behalf of the women, earlier this week, Edumoh said: “As mothers, we cannot fold our arms and watch our husbands and children being mercilessly thrown out of their jobs. If SNEPCO relocates its Supply Base from Onne, it means those who work there, numbering thousands of people will lose their jobs. It also means that our people who try to make ends meet by doing small contracts or trading around that facility will suffer.

“How do you want those people to cater for themselves and their families? What have they done wrong? What crime did they commit?”

“They say an idle mind is the devil’s workshop. If people don’t have jobs to do, that’s when they begin to conceive criminal ideas. We don’t want that to happen in our communities so we beg them not to leave Onne because Onne has been very good to them. It has been a very peaceful community which has supported their business very well for many years.”