There Is No Division In Ondo APC, Says State Chairman | Naija News 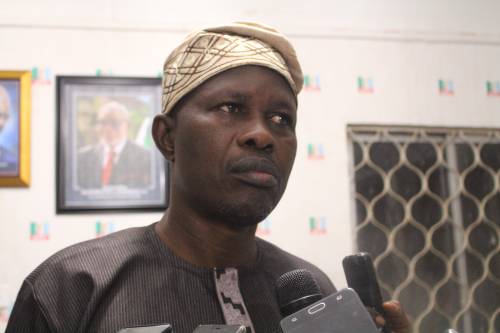 Ondo state Chairman of the All Progressives Congress, Ade Adetimehin has debunked claims by a group known as ‘the mandate’ that there is division in the state chapter of the party.

Adetimehin described the claim of the group as baseless and uncalled for.

Naija News gathered the mandate group at a news conference addressed by Micheal Olorunfemi, appealed to the national chairman of the party, Adams Oshiomhole to wade into the crisis.

Meanwhile,  in another development, an  Ondo State member of the House of Representatives representing the Owo/Ose Federal Constituency, Mr Bode Ayorinde,  has given reasons why he dumped All Progressives Congress (APC)

Ayorinde was among the former APC members of the lower chamber of the National Assembly that recently defected to the Peoples Democratic Party  alleged  that the impunity in the party pushed him out of the party.

The lawmaker, who was at the state secretariat of the PDP in Akure, the Ondo State capital, to obtain his expression of interest form to contest again for the House of Representatives election in 2019, under the platform of his new party, alleged that the APC destroyed democracy, following the alleged imposition in their last congresses.

He said, “I am the chairman of the lawmakers that left APC to the PDP and I left APC because of impunity in the party. APC is destroying democracy. The last congress they said they had was never a congress but an imposition.

“It had made democracy a mocking democracy. APC’s house is collapsing and as a lawyer, I have to leave because we tried to correct it but they refused.