A fan of WWE, Jason Sensation, had on Monday, August 27, 2018, tweeted about his plan to shoot himself in the head during Raw in Toronto on Monday, he claimed to have gotten his gun through the security.

The former WWE writer, Vince Russo, while reacting to the incident stated that he was able to get in touch with Jason and everything is fine.

Russo in his claim alleged that he (Jason) was only joking, and was nowhere near the arena where the wrestling will take place.

Jason Sensation tweeted saying, “I got my gun through security & will shoot myself in the head & kill myself during tonight’s #RAW in Toronto. Don’t ya dare miss it!!! Thanks for the memories @WWE.”

Jason has some history with WWE, he portrayed wrestler Owen Hart during a comedy skit in the late ’90s. His Twitter bio also said that he’s battling depression.

Law enforcement sources revealed that Toronto PD is aware of Jason’s tweet, and is currently looking into the matter. However,but no evacuation of the area is currently planned.

Multiple people in the WWE community, including ex-WWE writer Vince Russo have been reaching out to Jason, pleading with him to reconsider and refrain from any potential violence. 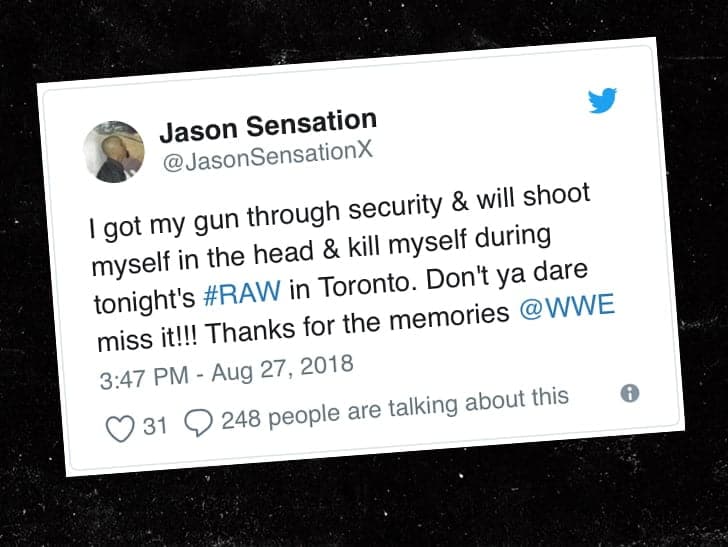