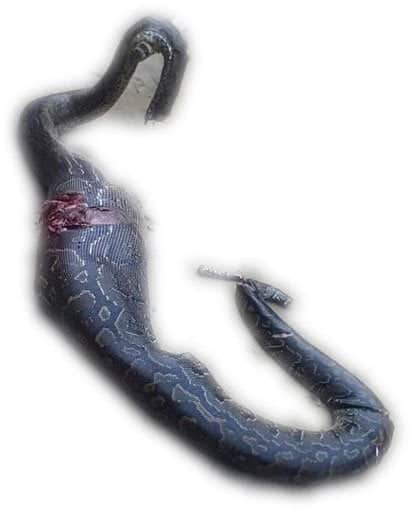 A huge python which swallowed a goat has been killed and shared by residents of Ijanikin community in Lagos state.

NaijaNews learnt that the python crawled from a nearby swampy area into one of the compounds where they rear livestock behind former Ariton Hotel, beside Vespa market.

After the python swallowed the goat, it could not move out of the compound, it was there it was discovered and killed.

One of the residents, Yeye Modupe, told newsmen: “The incident happened yesterday morning (Tuesday) at about 10. I was in my house preparing to go out when people started shouting”.

“When I got to the scene they had already killed the snake and were about bringing the goat out of its belly.

“This snake is a small one compared to the ones that had been killed before. Snakes usually crawl out from the bushes in the swampy area.”

Another eyewitness, Adebayo, who lives in the compound where the goat was swallowed, said: “The goat is not for Salah.

“Our landlord rears animals in the compound. Nobody knew when the snake started swallowing the goat. It was after it swallowed it and couldn’t move that one of the tenants discovered it and raised the alarm.

“We thank God it wasn’t a child that it swallowed.”

NaijaNews learnt that after the python was killed and the goat removed from its belly residents who killed the snake, shared it.