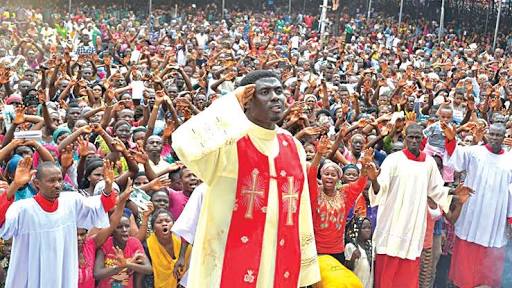 The cleric was reported to have delivered his message that the President is unable to take charge of the happenings in the country.

Obimma, who spoke at the 7th year of his Priestly ordination at his Umudioka residence, also called for unreserved apology from the Federal Government to Ndigbo and the Indigenous People of Biafra.

He accused the Buhari’s led government of branding them terrorists, “whereas terror groups like the Fulani herdsmen and Boko Haram killing people are handled with kid gloves.”

His speech read: “As you can see, there is crisis in the country. President Muhammadu Buhari is not in control of this country. People are dying on daily basis and I am not happy with it at all.

“There is indeed crisis in the country. I pray that our good Lord will salvage this country, Nigeria. There is crisis, even though those in authority are denying that there is political unrest in the country. I thank God, that God is answering our prayers. I believe that very soon, all these frictions, fracas and crisis will come to an end, because there is God.

“Well, my message for Muhammadu Buhari is let him resign since he cannot control the country. I said let him resign honourably because as you can see, he is not in control of the country, not only that, he is a sectional leader, a tribalistic leader.

“So, my stand is let him resign, as you can see his strength could no longer carry him. I am envisaging a situation where he will not be alive to complete the second term, if he comes out to campaign again. Let him resign honourably and find people who have the strength and capacity of managing the nation to carry on the baton. Nigeria is a big country and needs experts who have perfected in the political field to take control of the affairs of the nation. President Buhari is not that man.

On the controversies over the INEC’s 2019 election budget, he said: “the issue of INEC, the Senate and the Presidency, there are so many interests; they are saying so many things that we don’t know what to believe. I can’t say for sure but what I have to say is that you can see the inclination of political interests in the entire episode.

“Mark my words, APC groups are warming up to rig the election, as you can see the evidences are there. If by vote counting, APC can never win any election. If it is by counting of votes, there is no way this government will return because it is a government that is built on selfishness, nepotism, injustice. Government that is killing people, people are not happy with this government, so they knew that they under performed. What of those promises that Muhammadu Buhari made to the Nation before the election, none was accomplished, that, for me is a government of deception, running a government with deceit, it is very very bad.”

He added that “after the promises Buhari gave Nigerians before he was elected, nothing has changed. As you can see, many of our youths are unemployed, many a times when I pass or walk around the universities on mission, I see our young men, you know undergraduates, battalions of them, I ask myself what plans has the federal government have but as you can see, they don’t have any plan for them, that is why you will see somebody after being a graduate, the person will engage in one business or the other for him to survive.

“The hope of every average young man in other countries, their efforts in entering the university, studying very very hard and struggling to survive, trying to get degrees is for them to get a good job, but in our country Nigeria nothing is sure. You are a graduate, you have a wonderful certificate and that certificate is barren, certificate without satisfaction and government has no plan. It’s a pity.

“You know it has been my greatest worry. Go over there at the university and you will see people, you will see men and women, you will see our young undergraduates, sons and daughters, you know they are studying, but I am telling you that government has no plans for them, especially this government of President Buhari. Nigeria has never experience such a government, let Buhari stand up and tell us his achievements so far, let him say what he has achieved so far.

“This government has really under performed, really they came with the ideology of change but they didn’t change anything, so we are praying for another change, this one is real change that will upturn Buhari’s change that choked us. He came to power on false change promises which many believed; even a prophet of God prayed for him because everybody wanted change that will lead to a prosperous nation but here we are from frying pan to fire. Buhari is a huge disappointment to Nigeria.”

The Priest did not backup the apex Igbo socio-cultural organization, Ohanaeze Ndigbo, who he said were not speaking out.

“I am not trying to say that they have not been making efforts but their efforts are not enough. Now IPOB came up as a result of poor governance and they are agitating that the federal government is marginalizing them. Igbos have been undergoing marginalization, that was the crusade of Nnamdi Kanu and Nnamdi Kanu was suppressed and intimidated, but I want to tell the Federal Republic of Nigeria that you can never kill an ideology.

“Let there be a strong dialogue between Ohaneze Ndigbo and IPOB to have one voice for Ndigbo. I advise the IPOB to go for peace even in their agitations, let there be love. I stand here to tell the country that their agitations are right. The agitations about the sovereign state of Biafra, about intimidation and suppression, they are right, so let the federal government look into it.

“If really Igbos are being marginalized, let them do something, we can’t be answering one Nigeria for mouth, just mere camouflage, one Nigeria on a table of sabotage. When you stifle what is meant for general consumption, that is economic sabotage, when you strangle what you supposed to give to brothers, that is wickedness.

“Let the federal government look into these agitations; it won’t end by shooting them, killing them on daily basis. Buhari should register an apology to Ndigbo for that kind of thing, how can innocent people who are agitating be proscribed? They are freedom fighters and Buhari proscribed them, branded them as terrorists whereas Boko Haram are killing people and nobody has ever proscribed them or branded them as terrorists. Fulani herdsmen are killing people on daily basis and nobody has ever proscribed and branded them terrorists. But agitating youths in the South East, my dear brothers were branded terrorists by their country Nigeria. Is this not outright intimidation?”