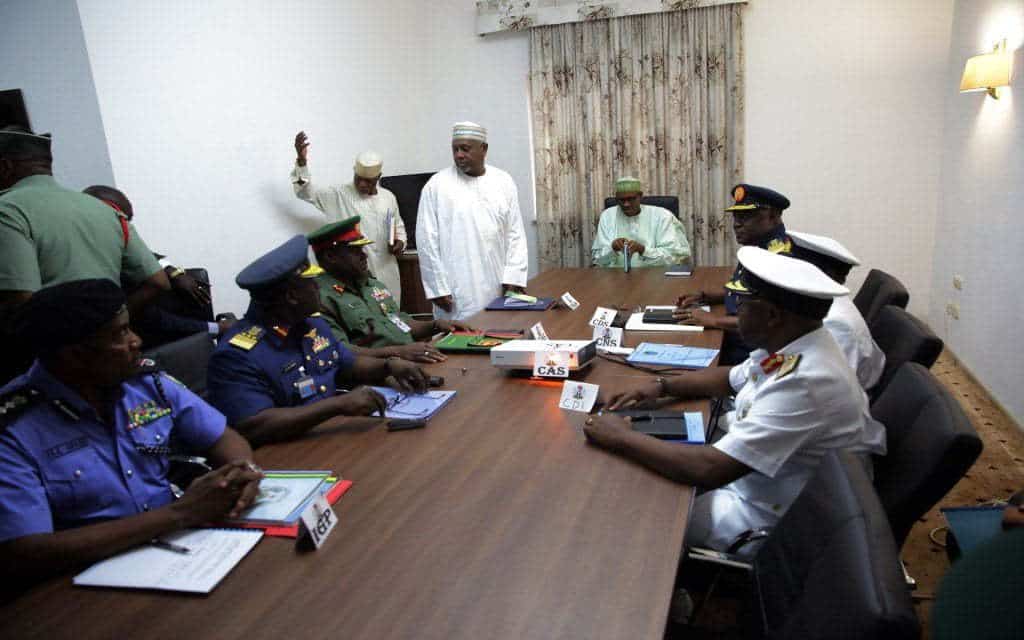 Following his return from a ten-day visit to London, President Muhammadu Buhari had a Council meeting with some service chiefs yesterday and ordered  them to improve the level of their  security operations in the country with a view to guaranteeing peace and safety of citizens.

Naija News learnt that, The Chief of Defence Staff, Gen. Gabriel Olonisakin,who spoke with journalist after the council meeting  said the meeting reviewed security situations in all parts of the country and participants made submissions.

According to him, the service chiefs briefed the president on the successes recorded from their various operations and the president instructed them to increase the tempo of their operations in such a way that the safety of citizens could be guaranteed and everyone proceeding on his/her activities without any fear of insecurity.

“We just had two and half hours’ meeting with the President and Commander-in-Chief. We reviewed the security situation across the country in all the geopolitical zones and of course, we made all our comments, especially the new operations in Benue, Zamfara, Taraba operation WISE stroke, and operation (Saradaji).

Also speaking, the Minister of Defence, Brig. Gen. Mansur Dan-Ali (rtd), described the meeting as a routine security briefing with the president, adding that it was a mere update on the last one held on August 2, a day before the president left Nigeria.

According to him, whereas the meeting received disturbing security reports from the North-east, reports from Benue, Zamfara States and the Niger Delta showed a great degree of improvement. However, he said the North-east situation had been critically looked into and the council had taken a decision on how to address it.

“This is a normal routine security briefing with Mr President. He just came back. So, we briefed him on all the activities we had while he was away. It’s an update on the August 2nd Meeting.

“The decision that has been taken is that we have seen that there is a lot of improvement in the security situation in the country most especially in Zamfara and Benue States and in the Niger Delta. In the North-east, we are having worrisome reports. We have looked into it critically and we have taken absolute decision,” he said.